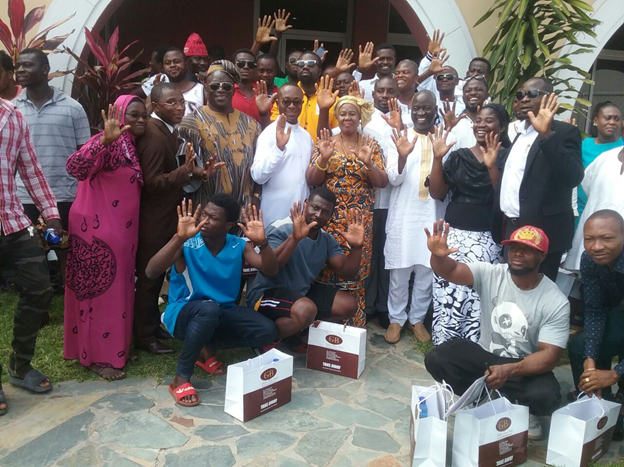 The REEWARG, together with the Ashanti Regional Peace Council (RPC), said it had identified the role of body-builders in peace-building (those who refused to be hired to commit mayhem), so essential because of the admiration they attracted from the youth in the communities.

“This could be used positively when you act as peace ambassadors and be part of the on-going national peace discourse, to help maintain a peaceful atmosphere in the election period and after”.

The advice came when the REEWARG/RPC sub-committee on youth and religious groups, met with the Kumasi-based Macho Men for Peace and Justice Group at the Sunset Hotel in Kumasi, as part of REEWARG’s bid to engage selected youth groups in the Region to prevent the occurrence of electoral violence in the Region.

The sub-committee chaired by Professor Imoro Braimah, with Ms. Harriet Takyi, Reverend Father George Gyasi, Mr. George Agbee and Reverend Emmanuel Amoah Badu as members, the commitee members took turns to advise the group to resist the temptation of being used as politicians to foment trouble whiles also staying out of anything violent.

The youth body builders were also admonished to endeavor to erase the negative connotations and perceptions about body-builders and live out their avowed aims and objectives-“peace” and “Justice”.

During the peace interactive session held on the theme “Non-violent means of peace building-a corporate responsibility”, the “machomen” had the opportunity to watch documentary videos on electoral violent conflicts in Sierra Leone and La Cote D’Ivoire.

Mr. Gilbert Ntiamoah Polos, President of the Peace and justice body builders, thanked the REEWAARG for the engagement and said his group, non-partisan, formed in 2012, was not part of the other ones residing in the ghettoes, who were hired to perpetrate violent atrocities during election periods.

Bitcoin Briefly Surpasses US$25,000 Mark Before Slipping Back – Platform

I did not become rich on silver platter – McDan