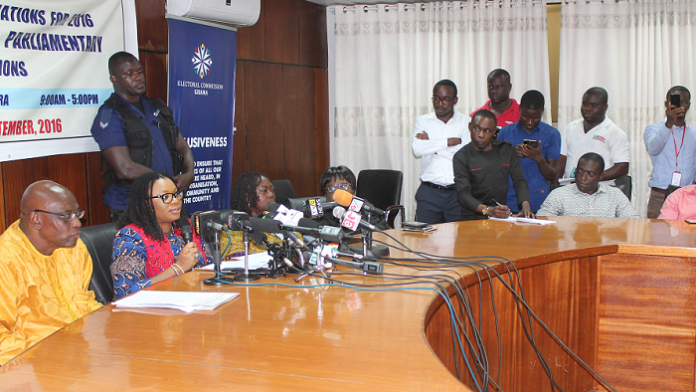 Another major hurdle has been cleared for the conduct of the December 7 elections as the seven qualified presidential candidates yesterday picked their positions on the presidential ballot paper.

That was after the Electoral Commission (EC) had cleared three more presidential aspirants to bring the number of presidential candidates to seven.

President John Dramani Mahama of the National Democratic Congress (NDC); Nana Addo Dankwa Akufo-Addo of the New Patriotic Party (NPP); Mr Ivor Kobina Greenstreet of the Convention People’s Party (CPP) and an independent candidate, Mr Jacob Osei Yeboah, were the only presidential aspirants cleared at the end of the first period of submission of nomination forms on September 29-30, 2016.

However, after the EC had vetted corrections on their nomination forms, as ordered by the Supreme Court, the nomination forms of the All People’s Congress (APC)), the Great Consolidated Popular Party (GCPP), the Ghana Freedom Party (GFP), the United Front Party (UFP), the Independent People’s Party (IPP), the United Development Systems Party (UDSP), the Democratic People’s Party (DPP) and an independent presidential candidate, Mr Kwame Asiedu Walker, were rejected.

After the balloting, the CPP took the number one position, followed by the NDP in second, the NDC third, the PPP fourth, the NPP fifth and the PNC sixth, while Mr Osei Yeboah, who did not pick by convention, got the seventh position.

The balloting was supervised by the Deputy Director of Elections, Mr Daniel K. Amenyo, in the presence of the Chairperson of the EC, Mrs Charlotte Osei, and other commissioners.

Before the balloting, the General Secretary of the NDC, Mr Johnson Asiedu Nketia, had raised an issue, indicating that by convention, the positions for the parliamentary election were supposed to be maintained for the presidential to ensure consistency.

But that suggestion was kicked against by the NPP and some other parties.

As soon the number three was mentioned for the NDC, Mr Nketia shouted: “Still number three.”

He, however, declined to speak further with the Daily Graphic, insisting that he had spoken at length on it when the parliamentary balloting was done.

The Chairman of the Campaign Team of the NPP, Mr Peter Mac Manu, said the position was welcome because the party had achieved consistency.

The Chairman of the PPP, Mr Allotey Brew Hammond, said the fourth position was in the middle, which allowed for easy identification.

The General Secretary of the NDP, Alhaji Muhammad Kpakpo Addo, said the second position meant that the party was one of the best.

The General Secretary of the PNC, Mr Atik Mohammed, said the sixth position, which was the day of independence, meant that the PNC was ready to win the election to bring about economic independence.

At a press conference before the balloting, Mrs Osei had explained that the nomination forms of the APC, the GCPP, the GFP, the UFP, the IPP, the UDSP, the DPP and Mr Walker had been rejected because the aspirants did not comply with Regulation 9(2) of Constitutional Instrument (CI) 94.

She said they either did not comply with the number of subscribers or properly sign their signatures.

Mrs Osei said the hearings with the party representatives had been amicable and all of them cooperated.

She said contrary to media reports, there had been no disagreement between the commission and the representatives, saying “the conversations were very civil”.

Some of the disqualified aspirants took legal action against the EC, seeking to be reinstated.

Subsequently, the PPP and the APC won their cases at the High Court, a development that required the EC to reinstate them.

The EC, however, went to the Supreme Court to seek a reversal of the High Court ruling, but the apex court affirmed the earlier ruling by the High Court and ordered the EC to allow the parties to correct their errors within two days, beginning last Monday.

Following the Supreme Court order, eight political parties and an independent candidate disqualified by the EC last Tuesday resubmitted their corrected nomination forms to the commission as ordered by the Supreme Court.