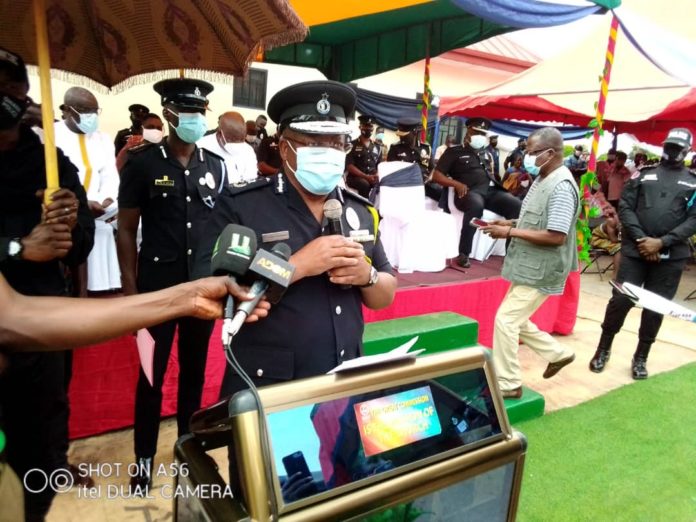 Mr James Oppong Boanuh, the Inspector General of Police(IGP), has cautioned the youth against engaging in political violence ahead of Election 2020 as the Police would neither defend nor shield anyone who breaks the law.

“I will not condone usage of violence in politics, anyone who commits a crime will be prosecuted. Do not allow yourselves to be used by some self-seeking politicians for mischief and violence because you feel your uncle or brother is the IGP and he is from Dormaa.”

“When your case comes up to the Police I’m sorry to say I won’t cover you up,” he warned.

Mr Boanuh said this when he inaugurated a newly constructed Police Station for the Nsesereso Community in the Dormaa Central Municipality of the Bono Region.

The Station was funded by Mr Kwaku Agyemang-Manu, the Minister of Health and Member of Parliament for Dormaa Central, upon request by Nana Brafo Ababio, the Chief of Nsesereso.

Mr Oppong Boanuh promised to construct police barracks for the community and asked for their support when the project begins.

He advised residents to respect the police officers who would be stationed there and should not hesitate to report any officer who deliberately tramples upon the people’s rights.

The IGP encouraged them to maintain the facility with the assurance that, at the right time, the Police Administration would consider elevating the Station to a district police command status after consultations were done.

He urged the people to endeavour to register in the ongoing voter registration exercise to enable them to vote in the December presidential and parliamentary elections.

Deputy Commissioner of Police (DCOP) Godfred Owusu-Boateng, the Bono Regional Police Commander, said it was the primary responsibility of the Police to maintain law and order while government provided the necessary infrastructure and resources to empower them to discharge their duties professionally.

He asked the residents to volunteer information timely to enable the Police to proactively apprehend criminals and other suspicious characters for prosecution.

DCOP Owusu-Boateng entreated the chiefs not to interfere in the work of the Police by going to plead for the officers to release erring relatives and friends.

Nana Ababio, on his part, appealed for a vehicle for the smooth operation of the Station.

Mr Drissa Ouattara, the Dormaa Central Municipal Chief Executive, said the inauguration of the Police Station was timely due to the area’s proximity to a border with Cote d’Ivoire, adding that it would ensure maximum security for residents at both sides of the border.

Online Forex Traders in Ghana should Engage with Caution