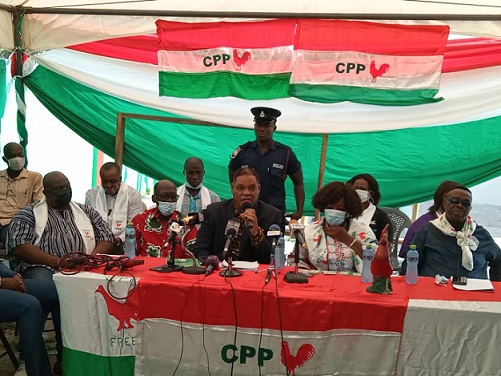 The Convention People’s Party (CPP) says they are the alternative to the two main political parties that have governed the nation for the past 28years now under the Fourth Republic.

According to the party, all the ideas, programs, and policies displayed so far in the past years by the two parties could not save the nation from its current status of high unemployment, corruption, indebtedness among others.

So, therefore, if something has failed it is your duty as citizens of Ghana to look for an alternative and we are here humbly before you to present ourselves as that alternative,” the CPP stated during a press conference today at the party’s headquarters in Accra.

The flag bearer for the CPP, Ivor Kobina Greenstreet who addressed the media said the electric shock mantra by his party is an experience they want Ghanaians to shown the New Patriotic Party (NPP) and the National Democratic Congress (NDC) a week today at the polls by voting against them.

“We came with honesty and integrity to plead with Ghanaians how they should exercise their very important vote come December 2020.

Mr. Greenstreet said Ghanaians should vote for the CPP number #4 on the ballot paper.

CPP in merger talks with PPP to ‘break the eight’

Journalists pledge to work towards corruption exposure and prevention

Can the broken NPP be fixed?