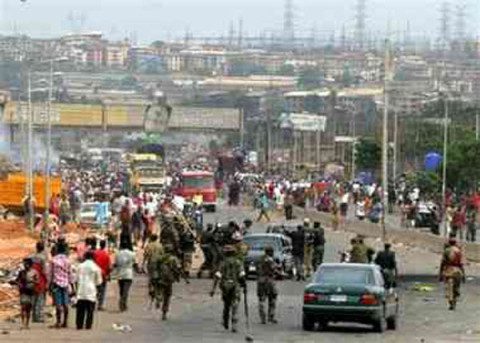 There is palpable tension at the Bridge head market, Onitsha over alleged irregularities and plots by the leadership of the market to disenfranchise over 1500 traders in the proposed election.

247ureports.com learnt that the precipitating crisis arising from leadership tussle in the market led to constitution of caretaker committee by the former Governor Peter Obi?s administration.

However, the alleged plot by the leadership of the market to disenfranchise some traders had led to court suit instituted by one of the aggrieved traders, Sir Peter Okala seeking court injunction to stop the proposed market election on the ground that it was aimed at sidelining the traders.

Sir Okala had approached Anambra State High Court, sitting in Onitsha, in suit No. 0/745/2014, seeking an interlocutory injunction to stop the proposed election pending the determination of the substantive suit which sought to get interpretation of non adherence to the market constitution as regards to the conduct of election in the market.

In written affidavit supported with the constitution of the Onitsha Bridgehead market, the counsel to Sir Okala, Mr. Chibuike Nwabueze drew the attention of the court to what they described as impending doom in the conduct of the market election if the issues sought by the plaintiff are not addressed.

They also sought the court interlocutory injunction restraining the Anambra State Ministry of Commerce and Industry, the caretaker committee chairman of the market, Chief Emeka Orizu and the chairman of Anambra Amalgamated Traders Association, AMATAS, Chief Okwudili Ezenwankwo from conducting election into the Executive committee of the market pending the determination of the substantive suit.

Visibly angry presiding Justice Agbata of Anambra State High Court 1 while ruling on the matter brought before him cautioned against possible breakdown of law and order.

However, despite the court action, some aggrieved traders are spoiling for war following the recent moves by the leadership of the market to go ahead with the election slated to hold on 30th June, 2014.

Apple and Google face possible probe in the UK