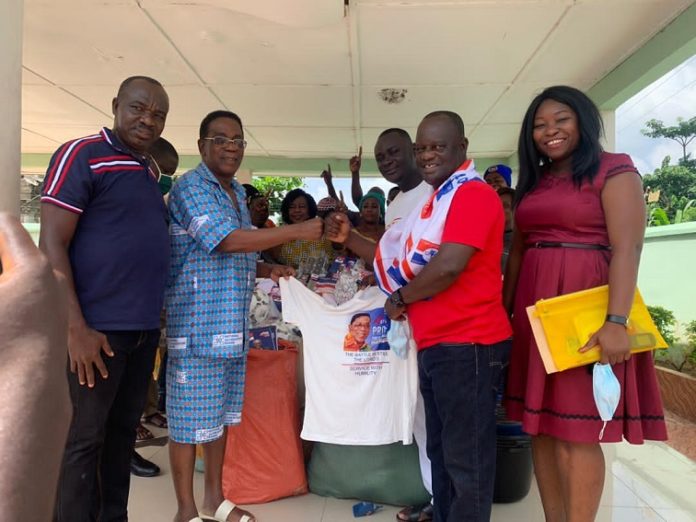 The China Branch of the New Patriotic Party on Tuesday, 24th November 2020, donated items valued at $9000.00 to support the campaign activities of one of their adopted constituencies, the Agona East Constituency.

The presentation was led by Dr. Koranteng Collins, China NPP campaign Chairman, Mr. Ben Owusu Achiaw(NPP China Branch Chairman), and was supported by the executives of the China branch.

Again, the NPP China branch presented a citation to Professor Kwesi Yankah, the parliamentary candidate for Agona East, for championing development in the area. With this presentation, a Godfather relationship has been established. Dr. Koranteng Collins Osei, NPP China Campaign Chairman presented the citation on behalf of the NPP China branch.

The Chairman of the NPP China Branch, Mr. Ben Owusu Achiaw, in his speech, stated that the donation is their contribution towards the 2020 campaign and election in the area and to bring a strong relationship between the NPP China branch and Agona East constituency.

He expressed the hope that the donation will go a long way in aiding the campaign efforts to ensure another gargantuan victory for NANA AKUFO ADDO and the parliamentary candidates in this year’s elections.

Receiving the items, the Parliamentary Candidate for Agona East consistency on the ticket of New Patriotic Party- Professor Kwesi Yankah, thanked the China Branch for the gesture and expressed the hope that such gestures would be extended to other constituencies so as to ensure a massive victory in this year’s elections. He promised to make sure these gifts will get to the grassroots members of the NPP Agona East constituency.