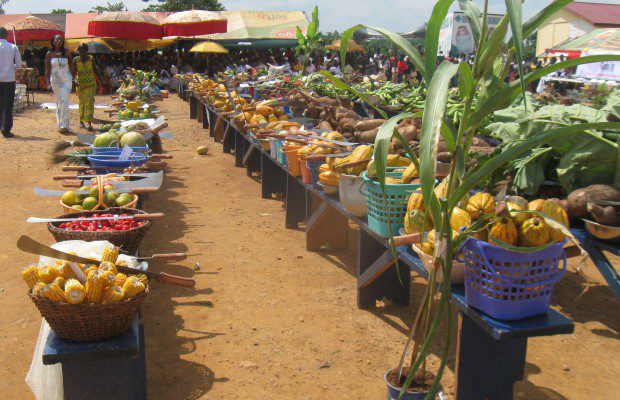 He took home a mini-tractor motor vehicle valued at GHC14,000, ten machetes, a solar lamp, wellington boots, a cloth, 6 bags of fertilizers and a T-shirt.

The second Best District Farmer went to Mr Daniel Boateng who took home a motorcycle, a wellington boot, 4 machetes, a knapsack sprayer and a bar of key soap.

This year’s celebration, was under the theme: “Agriculture: A Business Response To Economic Growth”.

Mr Emmanuel Armah-Kofi Buah, the Member of Parliament for Ellembelle, said farmers played a pivotal role in the development of the nation as it contributed 40 per cent of the nation’s Gross Domestic Product.

He said to boost farming activities in the area, the Menzezor Agricultural Research Institute would be revived next year adding that the Ellembelle Food Bank initiative which formed part of his manifesto would come into force next year.

“The Food Bank would not allow farm produce to go waste as farmers would have market and value for their products”, Mr Buah said.

Mr Buah, who is also the Minister for Petroleum, said Ellembelle had been chosen as a cocoa producing District hence the construction of the Aiyinasi-Samreboi cocoa growing roads.

He said challenges such as bush fires and lack of proper fertilizer application has affected the growth of the farming industry.

Mr Bernard Donkor, the District Director of Agriculture, said government would continue to invest in the agriculture sector to ensure food security and food sufficiency

He said government has embarked upon a pilot project towards the vaccination of livestock to improve the healthy conditions of pigs.

Mr Emmanuel Ntiwul, an Assistant Director in charge of the Coastal Sustainable Landscape Project, said his outfit has embarked upon a climate smart vegetable production to ensure that farmers do not apply contaminated chemicals in producing vegetables.