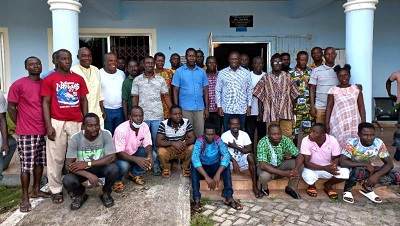 The Member of Parliament (MP) for Ellembelle Mr Emmanuel Armah Kôfi has organised a stakeholder’s meeting with Fishermen from Ankobra and Adoabo in the wake of seaweeds invasion known as Sargassum along the West Coast of Ghana.

The MP indicated that, realising the critical role the fisheries sector played in the economy, it was prudent for the Ministry of Fisheries, the Ghana National Petroleum Corporation(GNPC), and the government to expedite action to curb the Sargassum phenomenon along the coastal areas.

Mr Kofi Buah who said this during a crunch meeting with stakeholders in the fishing industry at Ambainu following a petition by the Ghana Environmental Advocacy Group on the invasion of a brownish seaweed along the shores of Ghana’s West Coast, lamented that the situation had led to the shortage of sea fish on the market which was affecting the fishing business.

The MP pointed out that there was a public outcry about the range of possible reasons for the change including environmental conditions, climate change, and possible human activities.

Mr Kofi Buah announced the establishment of the Ellembelle Fishermen Crisis Elevation Fund with an initial amount of GHc5,000.00 as seed capital to rescue them from their current predicament.

He said the decision to establish the fund with support from the local indigenous banks, mining companies, and other stakeholders was in line with his social responsibility to his constituents.

The MP expressed concern about the over shortage of sea fish on the market due to the invasion of the seaweeds as it was affecting the fishing business in Ellembelle.

Mr Kofi Buah said very soon he would present a petition to the appropriate agencies, stakeholders, and experts to bring ideas in fighting against the weeds to stop the phenomenon and advised the fishermen to develop one strong group so that they could be heard in one strong voice.

Fishermen at the meeting made it known that the seaweeds had made it very difficult to go fishing in the sea for the past five months with no relief package from the government.

According to them, they have written several letters to the Assembly and other Institutions for help but it all proved futile.

The Fishermen , according to Mr Nao Blay Ebambey, Chief Fisherman of Asanda, fishermen have taken loans from financial institutions to finance their fishing activities but with the situation at hand, they can not pay back those loans which could lead them into prosecution.

This has affected the local economy and has called on Mr Armah-Kofi Buah to come to their aid.

The District Environmental officer for Ellembelle, Mr Oliver Cromwell who was invited by the MP to give technical advice on the seaweeds which kept increasing on the shores of the coast, described the situation as very disastrous and critical, emphasizing that the quantum of seaweeds being washed ashore, was beyond the capacity of the Ellembelle District to fight against.

The situation, he noted, called for a national collaboration since the weeds contained substances that could cause headaches and other related diseases.

He cautioned the public to stay away from the weeds as it was unhealthy.

Mr. Cromwell called on the various institutions in the fishing industry to bring out technologies to curb the menace.