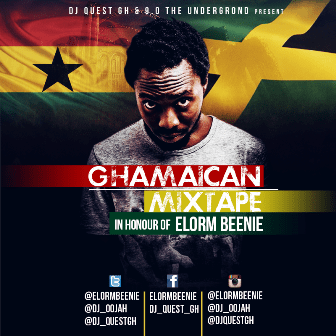 Award winning Producer, JMJ Baby, who has produced major artistes like Samini, Stonebwoy, Kaakie, Obrafour, 4X4 amongst others has disclosed on Hitz 103.9fm that Elorm Beenie was the one who actually named the 1st Ghanaian riddim he (JMJ) produced – known as the “Trigger Riddim”.

The “Trigger Riddim” produced in (late) 2008 and officially released in 2009 according to standing history is Ghana’s 1st produced Reggae/Dancehall Riddim. The issue sparked varied debates on social media days ago so King Lagazee invited JMJ on the show to set the records straight.

According to JMJ, the ace Ghanaian Publicist, “Elorm Beenie, has contributed largely to the Ghanaian Reggae/Dancehall industry and you can’t write Ghanaian Reggae/Dancehal history without him. He got me introduced to the riddim culture thing and how it’s done (in Jamaica, the Caribbean). He was the one who even promoted the project released in 2009. Until I met Samini, Stonebwoy & Elorm Beenie, I didn’t really know much about Dancehall.”

“Those days I would be in the studio and Elorm Beenie would bring records for Stonebwoy. So he keeps coming with the records and dude was so passionate about the job. Samini finished his version of the riddim and was on his way to fly out, by then Stonebwoy was with me in the studio and I could tell he was hungry to jump on the riddim. So I put him on, then Iwan and others also came on. Those days it was few DJs who knew about it or in support of his riddim thing. And gradually it picked up where Iwan got on. And a lot of artistes came on that I didn’t even know about. Elorm kept updating me on new Reggae/Dancehall records and it all came to shape this whole movement. People like Elorm Beenie, Samini and Stonebwoy contributed a lot to growing this riddim culture,” JMJ further explained.

“Initially I wasn’t a music producer. I was a singer playing in church. Started from Word Miracle Church, I was purely a Gospel and RnB singer. I met Appiah Danquah (Appietus) back in the day at Kays Frequency Studio in Asylum Down, Accra about 18 years ago. So an engineer in there for me introduced so recording so I could record my own music. So the journey changed from there. Later on I met Samini who jumped on my beat and that’s where we got along,” JMJ added.

Elorm Beenie is official Publicist for Rocky Dawuni, Stonebwoy, Samini, and a tall list of other Ghanaian artistes. He is one of the leading Artiste Publicists who has helped shot artistes like Kaakie, Kofi Kinaata, Epixode, Ras Kuuku into mainstream recognition in Ghana and beyond. He doubles as a Blogger too. The “Irie Jamz Compilation” project in 2016 (Ghana’s 1st Reggae/Dancehall Compilation) which hosted over 32 artistes officially on 28 songs had Elorm Beenie coordinating the entire project with 2 official medley videos – “Irie Bus Riddim Medley” and “Nima Clock Riddim Medley” – shot for the project. He also authored a book titled “Love Myelitis” — selling in over 120 international bookstores including Amazon, Barnes And Noble, Books-A-Million, Powell’s Books, iBooks, Yes24 stores in Korea, Vietnam, just to name a few.

King Lagazee is host of Lagazee Soundz International, a Reggae/Dancehall on air magazine which airs on Sundays on Hitz 103.9fm between 6:00pm to 8:00pm, and also streams online via TuneIn.