Emeka Ojukwu jnr, is the son of the famous Dim Chukwuemeka Odumegwu- Ojukwu,Ikemba Ndi Igbo .He is one of the kind that makes a man to shout “Gini kam mere chi ?”. 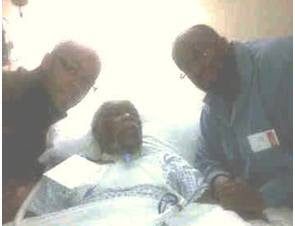 He is direct opposite of his father,in my hood they said that LION begat another Lion but in his case , a Lion begat a Ram. If one said he is a shame to his family, it will be ruled understatement.

Having refrained from exposing him over the years, because we do not want to let the world know that Dim had a useless son ,even when he went to his Father,s sick Bed in London ,snap him picture and sold it to SAHARA REPORTS telling the world that his Father is in Coma.Then i said maybe some agwu in his village is after him and i played cool.

He broke series of record for not been able to hold down any job ,even the ones his Late father spoon fed him with,he will always use his third leg to screw self out of the job.Not even Commissioner for special duties offered to him on platter of Gold for his fathers sake,he screwed that one too and without thinking of tomorrow. Womanizing was the reason his first marriage broke and it is affecting his second marriage today.

Meanwhile at his age ,his Father already served as Head of state but not this Emeka ,at his age ,he still bring disgrace to his father even in the grave,if he is not taking his father,s wife to court to contest wealth made by his father when he was younger than the said son ,he is dragging first Born with Sylvester the Biological First Son of Dim Ojukwu.If that is not happening he will be selling his fathers grave to those that wants to worship at the shrine and desecrating the final resting place of the LEGEND.

I won,t even talk about his eating habit which includes drinking of raw milk and excessive consumption of suya,well the result is showing on his weight ,which is about 400 pounds.

My Problem is not his person but his trading and mocking his late father and making merchandise with his fathers grave,is it not enough that he went about to people when his father was sick and resting in London, begging for money ,telling them that it is for his Father,s hospital bill ,while the Bill has been paid for by Gov Obi then ?.His Father stayed over one year in UK and he visited him only once and took that picture he sold to Social media.

I will remind us that ,same Emeka, a disgrace to Igboland, connived with Victor Umeh and resigned as a Commissioner under Peter Obi to see if he can put Obi under pressure. Victor had told him to tender resignation letter to force Mr. Obi to offer him unlimited money,judging that Obi would not want to offend Dim who was abroad on check up then.

Through to type, when Dim came back, he merely said that the resignation had shown that the man(Emeka Ojukwu, jnr) had proved that he is even incapable of helping himself.

He left with N70 Million naira of his Ministry paid into his personal account against financial guidelines. As usual, in other not to bring shame to Dim, the mess was not taken up.

Months after resigning. He came to the Government a House and cried to be re-Appointed at a time his father told him it was too late, since he had nominated an uncle of his to become the Commissioner.

The over grown baby son, Emeka Ojukwu, Jnr started sending bulk text messages that the cousin nominated by Dim was his father’s mother,s girlfriend for him to be relieved. It did not work.

My pain is that this prodigal son even after his father was laid to rest ,refused to allow the man rest in peace,he allowed Victor to come and caress his fathers corpse for a price ,yesterday will make it the 4th time and why i am so angry is that ,IKEMBA IS AN INSTITUTION ,NOT A TOY THAT ANYBODY CAN MOCK AND ENOUGH IS ENOUGH FOR VICTOR UMEH AND EMEKA OJUKWU on their torment on the grave of the ICON.If truly they want to tap strength from grave ,they should try some cemetery.

Emeka Ojukwu JNR should please go out and seek employment or get APGA TICKET and Run as a man,anything but this spoon feeding of a man at his age .