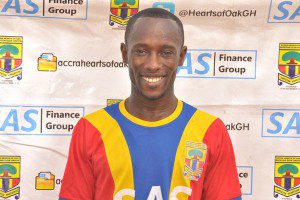 Hearts of Oak outcast Emmanuel Hayford has confirmed Asante Kotoko interest ahead of the start of the Ghana Premier League, Ghanasoccernet.com can report.

The 24-year old attacking midfielder had his contract terminated by the Phobians ahead of the 2015/16 league season for lack of commitment and discipline.

However, since his released, report went rife that Asante Kotoko have expressed interest in securing the signature of the former Amidaus Professionals player which was confirmed by the Kumasi-based.

A close source to Emmanuel Hayford has revealed that the Porcupine Warriors have expressed interest in the midfielder who is ready to join the rivals of his former club.

“Since Emmanuel Hayford left Hearts of Oak a lot of clubs in Ghana have expressed their interest in him but the biggest among the club is Asante Kotoko and he is ready to don the red jersey because he is a good player.”

“For now he is a free agent and moving to Kotoko will definitely enrich his portfolio because playing for the two biggest clubs in Ghana is no mean achievement and he will be happy to join Kotoko,” said the source.