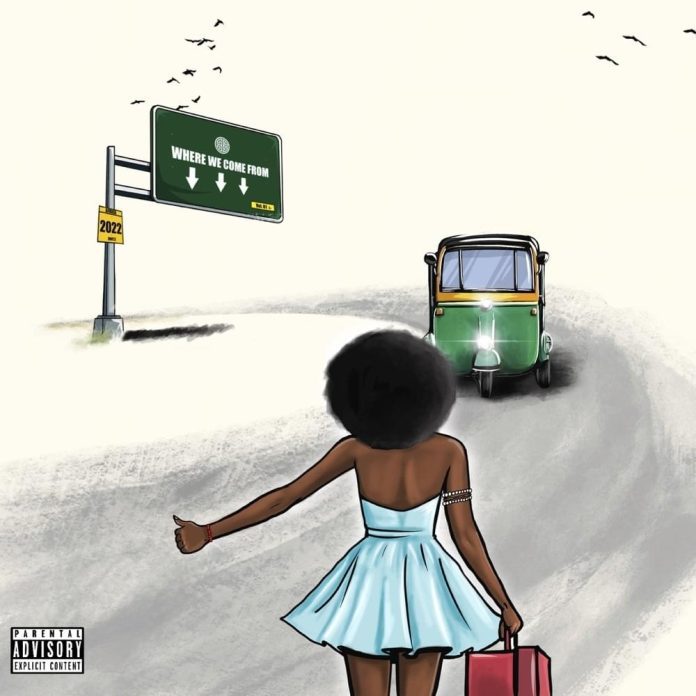 The compilation project is a body of work created during the writing camp held at EMPIRE’s headquarters directly following their first showcase “The New Africa” during SXSW. The cover art for the project, linked HERE will also be revealed for the first time. Nigerian artist Dricky Stickman incorporated all 15 songs into this graphic. The image illustrates unity, community, and culture.

As a continuation to the explosion of African music within the U.S airwaves, EMPIRE, the top record label in Nigeria, brought 19 artists from six African nations together and released its first-ever African compilation album, Where We Come From (Vol. 1), including 15 tracks. The cover art, created by Nigerian artist Dricky Stickman was also revealed for the first time today. Dricky incorporated all 15 songs into this graphic – it illustrates unity, community and culture.

“This project ‘Where We Come From’ is a perfect example of music having no limitations,” Kareem Mobalaji, Regional Head West Africa said. “Yes we are from Africa, but we are truly determined to reach the entire world with our voice which is music.”

This compilation project is a body of work created during the writing camp at EMPIRE’s headquarters in San Francisco directly following their first showcase “The New Africa” during SXSW. The crowd saw performances by BNXN FKA Buju, Cheque, Fireboy DML, June Freedom, L.A.X., Wande Coal, and other Afrobeat trailblazers who are signed to EMPIRE. While new bonds were forged, Wande Coal says the familiarity among the performers also inspired the collaboration: “Everyone on this album is a family. We’re all involved in each other’s lives which makes it easy to bring out your best self when creating music.”

“Africa is rich with some of the most talented creatives in the world. This compilation reflects EMPIRE’s continued commitment to community and culture,” Sak Pase, VP of A&R said. “This body of work is the epitome of unity, community, and culture. I look forward to the world’s continued embrace of African culture.”

EMPIRE is committed to furthering their artists existing success in America by continuing to highlight the accomplishments of Nigerian artists like Fireboy DML, Bnxn fka Buju, Olamide, KiDi, Black Sherif, and Asake.

EMPIRE holds this title by market share and is the top music company with the collective most No. 1’s in Nigeria by TurnTable Charts, the Billboard equivalent in Africa. Artists across EMPIRE’s roster have dominated the charts across multiple platforms including Apple Music’s ‘Nigeria Top Songs’ chart. The label has seen recent success with Asake’s Mr. Money With The Vibe album, which became the highest-charting Nigerian album and the biggest Nigerian album in Apple Music history.

Fireboy DML also became the first African artist to perform at the 2022 BET Awards. KiDi went platinum in India for his hot single “Touch It” featuring multi-platinum recording artist Tyga, and Black Sheriff gained 75+ million audio streams for “Kwaku the Traveller” in just one month. “The artists from Africa really transcend where music is today,” Ghazi, Founder and CEO say. “This is a legendary moment for EMPIRE to be able to share incredible African music with the world, much of which we were fortunate enough to record at our studio here in San Francisco.”

Stream Where we come from Vol 1 here https://music.empi.re/WWCF

Founded in 2010 by Bay Area native Ghazi Shami, EMPIRE is currently leading through its innovative approach to the digital music era across its label, distribution, and publishing arms. Ghazi has been recognized for his work in Billboard’s 2021 Indie Power Players list, Billboard’s 2021 R&B/Hip-Hop Power Players, as well as Billboard’s 2022 Power List. With its focus on early-stage artist development, the San Francisco-based company has been instrumental in launching the careers of multi-platinum, Grammy Award-winning Anderson Paak, BLEU, Key Glock, Young Dolph, XXXTENACION, KingVon, and more.

Through crafting bespoke deals that are always in favor of the artist, EMPIRE is able to form a true partnership with each artist and label on its roster. Coupled with EMPIRE’s unique software for analytics, recoupment, and royalties, which is available to every partner, the company offers a level of transparency unprecedented in the music industry.

Gee Bryant’s Biggest Strength That Helped Him Build an Empire

Jussie Smollett Suspended from Empire for Filing a False report