Employees in the informal sector have been urged to form or join associations and unions to enable them to have a stronger voice on issues pertaining to their rights and welfare.

Mr Augustine Apambilla Adongo, the Upper East Regional Secretary of the Trade Union Congress(TUC), who made the call, said it was only when they formed associations and unions that they could collectively demand for their needs to be met to achieve their objectives.

The Regional Secretary was speaking at a two-day training programme held in Bolgatanga, which was jointly organised by Action Aid Ghana (AAG) and the Regional Directorate of the Labour Office for employees drawn from the informal sector.

Mr Adongo attributed most of the challenges confronting employees in the informal sector to their failure and inability to form or join unions or associations.

The Regional Secretary, who cited the recent robbery attacks on members of the Tomato Traders Association as a case in point, said if those attacked had not been members of the association, the security agencies would not have given them the Police escort they were presently enjoying.

He said the TUC as an umbrella body of workers had about 21 affiliates, “Without such unions and affiliates, the work environment would have been chaotic”.

The Upper East Regional Labour Officer, Mr Abdulai Salifu, who acknowledged instances where some employers would do everything possible to frustrate the good intention of their employees to form a union or an association.

He cautioned such employers to desist from such practice but rather encourage their employees to form or join associations to help avert industrial strikes and demonstrations.

The Programmes Officer of AAG, Mr Yakubu Akuka, said the programme was under the multi-country project titled “Zero Violence”, funded by the Foreign Commonwealth and Development Office of the UK Government and being implemented in partnership with Frontline Aids and ActionAid UK.

Mr Akuka said one of the major purposes of the programme was to train informal workers on the need to form associations or join unions for a stronger voice as well as train them on the International Labour Organization Convention 190 and Domestic Violence Regulation 2020 to enhance their knowledge on the rights of workers.

Mrs Patience Akayine, a member of Basket Weavers Association in the region said they were not aware of the labour laws and as a result had flouted most of them.

She said she would share the knowledge acquired at the programme with her colleagues to help eliminate harassment at work place. 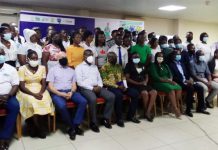