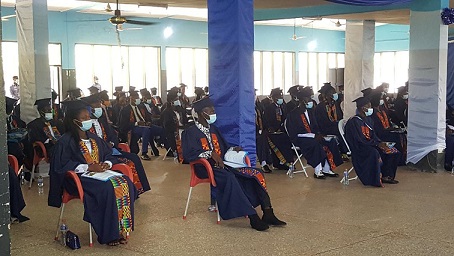 The Enchi College of Education in the Aowin Municipality of the Western North Region has held its 11th congregation, graduating 711 students with Diploma in Basic Education.

The theme for this year was “Sustaining Teacher Education in Contemporary Ghana.”

Mr Philip Ntaah, the Principal, in his address, said the COVID-19 pandemic made it impossible for the school to hold its congregation last year.

He said statistics showed that students output had improved tremendously compared to the previous years and commended the staff for contributing to this success and encouraged the students to study hard in the years ahead.

He announced that last year, two of their graduates had the opportunity to travel to France for an exchange programme dubbed “language Assistant’s Programme” where they supported teaching and learning of the English language in Senior and Junior High Schools for seven months.

“This year, another student went to France for five-month students abroad programme in French language and proficiency. The student had returned and shared his experience with the colleagues. It is the wish of our academic board that more students from the College would benefit from these programmes in the future,” he said.

He said the government with the support of the French Embassy donated computers, projectors and accessories to the French Unit of the College to enhance teaching and learning.

Mr Ntaah expressed appreciation to the donors and appealed to the French Embassy to construct a faculty block to comprise a studio, language laboratory, library and lecture halls for the College, which would serve as a resource centre for junior and senior high schools in the Western and Western North Regions.
The principal said research and publication had become an indispensable practice in tertiary institutions for the promotion and improvement of staff.

He said currently Enchi College of Education has eight tutors, who have been promoted to senior tutors by the Ghana Tertiary Education Commission (GTEC) while two have their publications with GTEC awaiting the assessment reports for promotion.

Mr Ntaah mentioned that 23 tutors of the College held Master of Philosophy Degrees while nine were currently pursuing Doctorate programmes, and these were measures to enrich teaching and learning.

The principal expressed appreciation to Transforming Teaching, Education and Learning (T-TEL) for aiding their tutors to undergo capacity building in online teaching and learning, which was organized by the Amsterdam University of Applied Sciences with assistance from the Transition Support Fund.

Touching on the theme, Mr Richard Ebbah Obeng, Western North Regional Minister, explained that the sustenance of teacher education in contemporary Ghana would be a reality only when the teacher in the classroom met professional standards.

He said, “the world had become a global village and international demands call for acceptable professional and academic activities in their schools.”

He, therefore, entreated the graduates to demonstrate a sense of creativity, spontaneity, self-discipline and flexibility to enable them to meet the competitive demand that education currently required.

Ogyeahoho Yaw Gyebi II, President of the National House of Chiefs and Omanhene of Sefwi Anhwiaso Traditional Area, thanked the government for contributing immensely towards the development of Colleges of Education in the country.

He appealed to individuals, philanthropist and organizations to come on board and develop Enchi College of Education.

Mr Oscar Ofori Larbi, Member of Parliament (MP) of Aowin constituency, congratulated the graduates and reminded them to uphold the values of the institution.

He advised the graduates to seek knowledge to enable them to make significant changes in their lives and society.

She thanked the staff of the College for their sacrifice, commitment, dedication, and urged his colleagues to be worthy ambassadors of the College wherever they find themselves.

She received awards and citations from other students who excel during the period.

Unemployment and rehabilitative care – Any hope for unemployed graduates