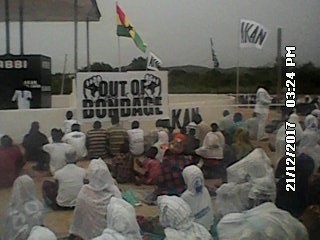 Asomdwee, Ntonton Som (the religion of Peace and Adoration) also known as the AKAN Religion has ended its week-long programme of encircling the temple of Rabbi with a call by its leader Onyame Somafo Yaw all Ghanaians and the world at large to embrace and participate in such subsequent event, as it remains the only true religion that is intended to unify humankind, irrespective of their socio-ethnic background or race.

Onyame Somafo Yaw gave this assurance in an interview with the media after a briefing of the origin of the religion.

According to him, Akan was the name of the 19th Prophets of the religion born in Asia who migrated to Assyria where God Commanded him to move to a land that He has prepared for him which no man has tilted before, flowing with milk and honey.

He has upon the Commandment, AKAN gathered his followers and moved till they got to Central Africa where he realized that that was the land God told him of so he settled there until his death.
Onyame Somafo Yaw further revealed that after his death, his followers continued their journey to Techiman in Ghana where they dispersed and started worshipping idols because of lack of a leader, culminating in the various Akan tribes in the country such as the Fantes, Akwamus, Asantes, Assins, Ekuapems, Wassas, Akyems, Denkyiras, Ahafos and the rest.

According to Onyame Somafo Yaw, God has chosen him as the next Prophet after Akan to bring the world together again by resurrecting the religion and also establish His temple (the Rabbi), the third and only temple after the Kaba in Mecca and the temple of Solomon in Jerusalem.

He said this temple symbolizes God’s power and authority, and anybody who confesses his sins and encircles it will be forgiven of all sins and have God’s favour and blessing on his or her life.
The pilgrimage was undertaken by people of various nationalities.