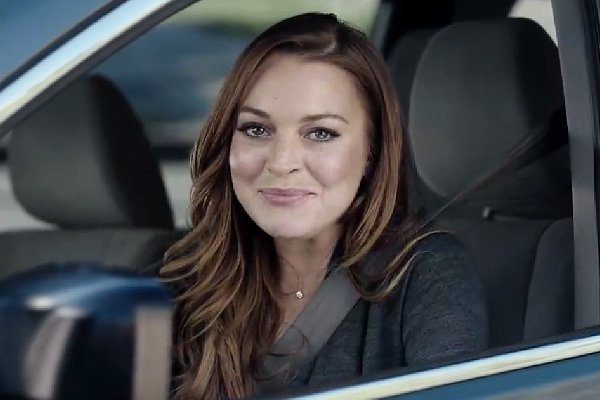 Lindsay Lohan stars in a new Super Bowl commercial for car insurance company, Ensurance. The 28-year-old actress took to Facebook on Tuesday, January 27 to share a teaser clip of her new advert.

In the video, LiLo, who is behind the wheels, can be seen pulling down her car window as she says to camera, ?Anybody need a ride to the big game?? The ?Confessions of a Teenage Drama Queen? star captioned the video, ?Time to crash the big game #sorta.? In other news, LiLo is reportedly in a ?race against time? to complete her community service stemming from a 2012 reckless driving case. She is due to report to court on January 28. However, she was spotted partying in Paris on January 25.

A source tells PEOPLE that LiLo was hitting the Paris club Le Titty Twister until early hours. ?[Lindsay] came in with two friends around 3 in the morning and stayed until around 5:00, 5:30. She danced and amused herself a lot,? the source claims, adding that LiLo has been there before.

According to , LiLo went to the Community Service Volunteers in London on Friday and Saturday and planned to go on Sunday, Monday and Tuesday. She recently told her people that she contracted Chikungunya during a vacation in Bora Bora but according to the site, some of her people thought LiLo checked herself into hospital ?just to create an excuse.?