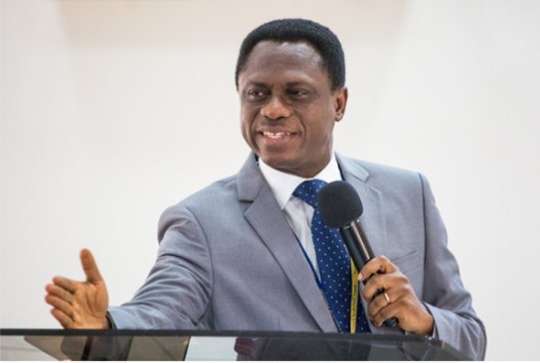 Apostle Eric Kwabena Nyamekye, the Chairman of the Church of Pentecost, has urged those aspiring for leadership positions to ensure they possess the ability, right relationships and the resources to successfully deliver on their mandates.

He observed that citizens were often disappointed by leaders who lacked the requisites to resolve the challenges for which they were given the authority.

Leadership is responsibility, he emphasised, therefore, every leader must be results-oriented and have the integrity to lead.

“Leadership is responsibility, and the focus of every leader must be to solve problems and meet the needs of the citizenry. He or she must live an exemplary lifestyle that is pleasing to God to surmount all challenges,” he said.

Apostle Nyamekye was addressing a service at the Alajo Central Assembly of the Church of Pentecost, where the newly inaugurated President of the Ghana Journalists Association, Mr Albert Kwabena Dwumfour, is a congregant.

Traditional leaders, the clergy, and other senior media practitioners were also present.

Apostle Nyamekye quoted Proverbs 14:34, “Righteousness exalts a nation, but sin is a reproach to any people”, and emphasised that Ghana was not advancing because of widespread unrighteousness.

He said regardless of the myriad of churches across the country, there was too much darkness regarding the attitudes of both the leaders and the citizenry.

Thus, he explained, churches did not change people but Christ.

For the nation to achieve the much needed transformation, he said, both leaders and citizens must embrace righteousness and work for a common purpose.

He urged the GJA President, Mr Dwumfour, to employ the Pentecostal teaching of purposefulness and righteousness to transform the Association, adding: “You must go into office as the salt and the light to bring a change.”

“Once you are identified as a Christian, you must let God reign wherever you are. And if, indeed, journalism is the Fourth Estate of the Realm, may we do good and impactful journalism to build a strong nation.”

He assured him that the Church was excited that one of its own had attained such a feat and would, therefore, support him with counsel and prayers to be successful.

He prayed for the leaders to bear good fruits, serve their people with humility and leave a positive legacy.

In a congratulatory message, COP Addo-Danquah said integrity and teamwork were important ingredients in building an association and urged Mr Dwumfour and his team to make those their guiding principles.

She said the GJA President must not view his critics as opponents but utilise the criticisms to his advantage to build a strong Association.

He urged him to be wary of “praise singers” because not all of them would be telling him the truth.

COP Addo Danquah urged the Executive to pursue programmes that would groom journalists into independent professionals who would always speak the truth.

“I urge all journalists to rally behind Mr Dwumfour, put the past behind them and help push the Association to a level that would be beneficial to all,” she said.

Mr Dwumfour, on his part, gave glory to God for seeing him through his lowly beginnings to a place where he could serve in leadership capacity.

He said he was encouraged by the goodwill and prayers received from different segments and was determined to executing his mandate as an exemplary leader.

“I will not disappoint you, ” he said, and urged his fellow contestants to get on board and work as a team to strengthen the media towards national sustainable development.