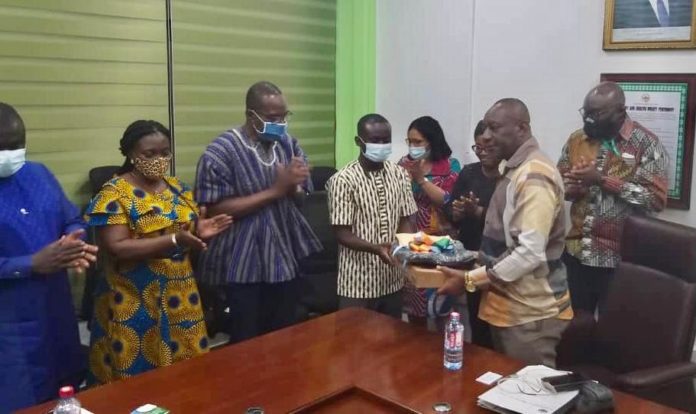 The Environmental Protection Agency (EPA) has presented a laptop with its accessories, and a cash award to the Ghana Journalists Association’s (GJA) 2019 Best Journalist in Environmental Reporting.

At a brief ceremony at the headoffice of the Agency, in Accra, Mr Albert Oppong-Ansah, a chief reporter of the Ghana News Agency, received his package, in fulfillment of a three-year pact between the EPA and GJA.

The agreement, among others, seeks to train and encourage journalists to create greater awareness on environmental issues towards promoting sustainable national development and the well-being of citizens in a healthy environment.

Dr Henry Kwabena Kokofu, the Executive Director of the EPA, who made the presentation, commended Mr Oppong-Ansah for his feat, saying the Agency was committed to supporting journalists in numerous ways to discharge their duties effectively and efficiently in the national interest.

He hinted that the management of the Agency would improve the tenets of the existing Memorandum of Understanding to enhance greater participation of journalists and better results.

Dr Kokofu said there was an urgent need to educate the public on the need to sustainably use the services nature provided, while protecting them for the future generations.

The Executive Director explained that although the State had given the nature protection mandate to the EPA, it also demanded of citizens to take steps to safeguard the environment under the Directive Principle of State Policy.

“We all need to know that we have only one environment designated for Ghana and when it is destroyed through our actions, such as illegal mining and fishing, air pollution and deforestation, we will all perish because there cannot be another environment for us to annex.

“It behoves us, as a people, to, therefore, protect it so we can enjoy nature.”

He urged journalists to help to preserve the peace of the nation during the electioneering, voting and thereafter.
Mr Affail Monney, the GJA President, commended the Management of EPA for the support, saying, members of the Association had benefited from the partnership in the form of training, which was reflecting in the quality of environmental reportage.

He said as journalists “we have a great responsibility to ensure that the environment is protected and safeguarded.”
The GJA President said issues of the environment needed to always be brought to the front rows of national discussions to ensure increased awareness for the requisite actions.

Mr Oppong-Ansah, for his part, thanked the Management of the EPA and the leadership of the GJA for recognising his efforts, which, he said, started more than nine years ago at the Ghana News Agency.
He said his passion for reporting on the Environmental was motivated by the unique function nature provided for human mankind.
It was, therefore, imperative to educate the public to safeguard what sustained the lives and livelihoods of all.

He said the GNA had a dedicated Environment and Science Reporting Desk and urged institutions to partner the Agency in its efforts to address environmental issues, using diverse forms of communications tools.

He commended the acting Director of Corporate Affairs of the EPA, Mrs Angelina Tutuah Mensah, for her willingness to facilitate access to information, which he said, promoted balanced reportage.

Mr Ansah’s feature on how bushfires destroy biodiversity in the soil and their impact on soil fertility and food security won him the award.

Present at the event were officials of the EPA, including Mr Ebenezer Appah-Sampong, the Deputy Executive Director of the EPA and Mrs Mensah. Also present were Mrs Linda Asante-Agyei, Vice President of GJA, Mr Albert Dwumfour, the Organising Secretary of GJA, and Mrs Beatrice Asamani Savage, the Director of Editorial of the GNA.