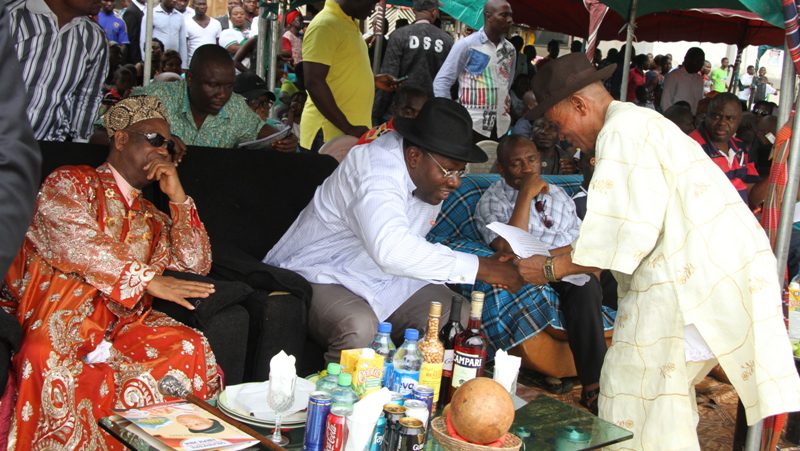 The Epie people of Yenagoa Local Government Area in Bayelsa State have been lauded for consistently protecting and projecting the culture and tradition of the land.

Bayelsa State Governor Seriake Dickson, who was?Special Guest?of?Honourat?the the?celebration of the Obunem Epie Annual Festival at the Edepie Primary School,?said?a people, who do not know their culture, will not know their past as well as positively shape their future.

The Governor, who assured the people of his resolve to participate in future editions of the festival, stated that, concerted efforts were being made by the government to ensure the preservation of the peoples? tradition, culture and language.

Governor Dickson announced the?fulfilment?of a N20 million revolving loan scheme earlier promised the Epie and Atissa women and urged them to go through the State Micro- Finance Agency for proper advice and documentation details on how to obtain the loans, while also donating the sum of N3 million on behalf of the government to support the festival.

He was equally full of appreciation for the Epie people for their?humane?and peaceful?dsposition?as hosts of the state capital,??noting that, it has contributed to the present rating of the Bayelsa as the most peaceful state in the country.

?I appreciate you for being a good host as you have been peaceful and the state has enjoyed peace as one of the most peaceful in the country.

?I enjoin you all to continue to support the policies and?programmes?of government.? You can see the massive construction of roads and flyover for the first time in the state.

Hon. Dickson, who was accompanied to the occasion by his Deputy, Rtd Rear Admiral Gboribiogha John Jonah, used the opportunity to renew his call on the youths of the area to take full advantage various institutions and investments in the state capital to improve themselves and?play more positiveroles in societal growth.

I expect you all to take advantage of the numerous institutions and other investments in the state capital.? Just yesterday, I commissioned the International Institute of Tourism and hospitality, the new facilities at the St. Judes Girls Secondary School, Amarata, Bishop Dimieari Grammar School and the Bayelsa State College of Arts and Science, which will give you a sense of belonging.

In his address, the Chairman of the occasion, Elder Bob?Ozaka, described the festival as a potent force, through which the core values of the Epie Kingdom can be restored, stressing that it is a revival of the cultural activities of the people and called?on?the Epie Traditional Institution to discourage vices that have continued to erode the cherished traditional marriage institution of the people.

US$4 Billion to be made from Tourism, Arts and Culture by 2024