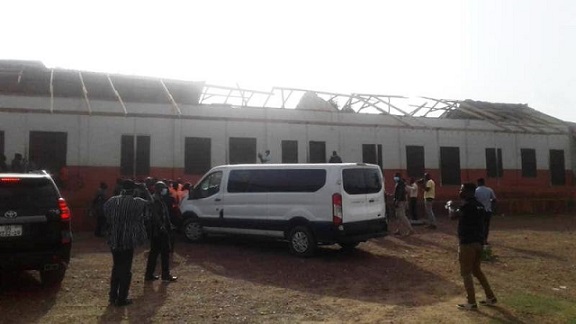 The people of Akim Oda in the Birim Central Municipality of Eastern region were on Monday hit by a devastating rain storm which ripped off large portions of their houses and displaced scores of people.

The extent of damage caused by the storms has been described by several people and disaster management officials as the first in recorded history in the municipality.

A preliminary assessment conducted by the Municipal National Disaster Management Organisation (NADMO) indicates that the storm fell a lot of big trees, including the mast of the local Ofie FM radio station and ripped off roofing sheets of school buildings, churches and mosques.

It also pulled down high tension wires and other landed properties, whose value is estimated to run into millions of Ghana cedis.

It also caused interruption in the supply of electricity to some parts of Akim Oda, plunging several areas into total darkness.

Speaking to the Ghana News Agency, Mr. David Okyere, Birim Central Municipal Director of NADMO, said the rain storm started on April 5, 2021 at about 1530 hours and lasted for about 40 minutes.

Mr. Acheampong, who is also the Chairman for the Eastern Regional Disaster Management Committee, described the extent of damage as a major disaster that required special attention.

He assured the victims that in a week’s time the government and NADMO would act on the damages that have been caused to properties.

He said NADMO was working on a detailed report to ascertain the cause of the storm.
He advised the public to adhere to advice of the Meteorological Survey Department on details of the environment.

Mr. Appiah Kodua the Eastern Regional Director for NADMO said, the national disaster management body alone could not manage disasters and therefore called on other institutions and organisations to support the victims.