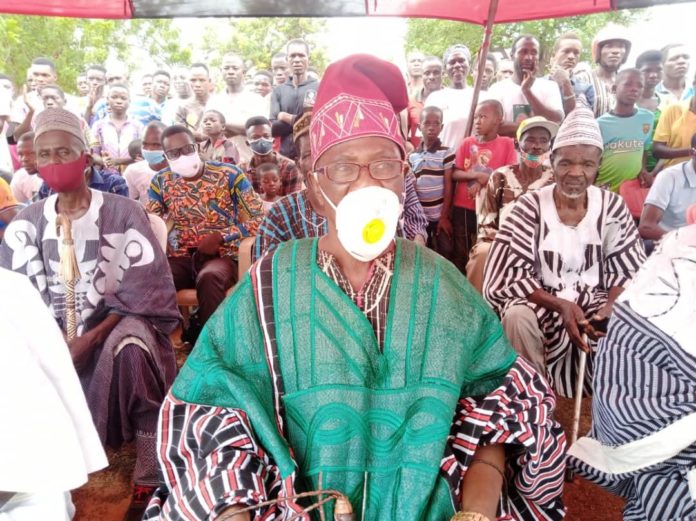 “It is noted with concern that work on a project to extend electricity to some parts of the community as well as those in Lisa, Boo, Doweni, Baazing and Tampie Baagan had been suspended since the beginning of 2017”, he said.

Naa Tang made the appeal when former President Mahama and his entourage paid a courtesy call on him at Eremon in the Lawra Municipality of the Upper West Region on the third day of his four-day campaign tour of the region.

“The people in these communities feel discriminated against and are crying to have power extended to their homes too”, he noted.
The Chief said Eremon and its surrounding communities benefited a lot under the PNDC/NDC administrations in terms of development infrastructure including school blocks, health facilities, afforestation, electricity, and the construction of a foot bridge and thanked them for the projects.

Naa Tang also appealed to the Leader of the NDC for the 2020 Elections to to upgrade the Eremon Health Centre to a Polyclinic to complement the Lawra Municipal Hospital.

“It is sad to note that the Eremon/Baazing road construction awarded in 2016 and the Koo-Doweni-Lisa road, has been abandoned and has become deadly to travel on”, he said.

The Eremon Naa appealed to former President Mahama to establish a groundnut factory that would process groundnuts into finished products for local consumption and for the export market if elected into office.

He equally appealed for the completion of a small town piped-water project, dormitories, science laboratory at Eremon SHS, the Lisa JHS and the Boo-Doweni SHS that were initiated by the former President, but had been abandoned since he left office in 2017.

Former President Mahama lamented the situation, where governments come and abandon ongoing projects initiated by the previous government just because they think completing such projects would bring credit to the government that started it.

He said all the abandoned projects at Eremon and other parts of the country were being undertaken with the tax payer’s money and such funds should not be allowed to go waste.

He, however, promised to complete all the abandoned E-Blocks and others when voted into power come December 7, adding that was the best way to complete to abolish the double track system.