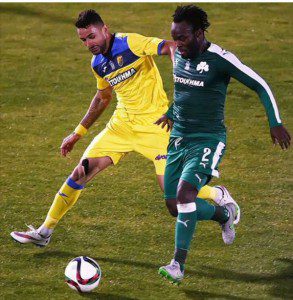 Ghana midfielder Micheal Essien displayed a man of the match performance to see his Pananathenaikos side beat rival Panaitolikos 4-2 in the Greece Super League.

The Ghanaian who lasted the entire duration of the game marshalled the midfield of the Greens with an inspirational output to see his side pick the victory.

The visitors opened the scoring under two minutes when Villafanez hit a thunderbolt past the Pana goalkeeper but the hosts stood to the occasion and cancelled the score four minutes later through Abeid.

Craotian forward Mladen Petric increased the tally for the Greens but Markovski cancelled the lead to make it 2-2 before half time.

Panathenaikos returned with a blast with Petric adding his personal second and Panathenaikos’ third while Abeid also added his second goal on the night to make it 4-2.

The win means Panathenaikos have moved to thrid position on the 16-team league table after sixteen matches with 28 points.