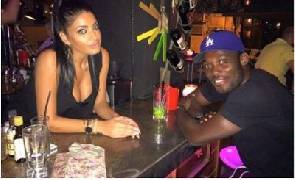 The 33-year-old in a report carried by Greek website gossip-tv.gr had been with the sultress Greek model since arriving in the European country.

It was reported last year that the former Chelsea star who is married with three kids has been hanging out with the beautiful socialist who is famed in Greece, a report which was quashed by the Ghanaian superstar. Latest report emerging from Greece however indicates the two broke-up a month ago.

Gossip-tv.gr had reported Anna Diamantopoulos had constantly posted images of herself and the Ghanaian international on Social media.

The two on countless occasions according to the report by gossip-tv.gr were spotted at joints in the Greek City of Athens.

It is however unclear as to what led to the break-up between the two who had been seeing each other for the past 6 months.