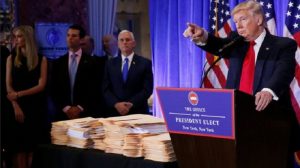 Journalists were not allowed to examine documents handing control to Mr Trump’s sons The director of the US Office of Government Ethics has sharply criticised Donald Trump’s plan to hand his global business empire to his sons before his inauguration on 20 January.

The plan does not match the “standards” of US presidents over the last 40 years, Walter Shaub said.

But Mr Shaub said the plan would not remove conflicts of interest.

“Every president in modern times has taken the strong medicine of divestiture,” he said, referring to a process whereby Mr Trump would sell off his corporate assets and put the profits into a blind trust run by an independent trustee.

At a news conference on Wednesday, lawyer Sherri Dillon said that management of the Trump Organization would be transferred to a trust controlled by Mr Trump’s sons Don and Eric and chief financial officer Allen Weisselberg.

The Trump Organization is an umbrella company for Donald Trump’s hundreds of investments in real estate, brands and other businesses.

National intelligence director James Clapper said he had told Donald Trump that the intelligence community had not “made any judgment” that the information in a dossier alleging Russia had compromising material on the president-elect was reliable. He also told Mr Trump that he did not believe the intelligence community was the source of the leaked allegationsMexican President Enrique Pena Nieto said his country would “of course” not pay for the wall that Mr Trump on Wednesday again promised to build at its expense to block illegal immigrantsSecretary of state nominee Rex Tillerson said it was “a fair assumption” that Russian president Vladimir Putin had been behind hacks of the US Democratic party during the election campaign. Mr Trump also said for the first time “I think it was Russia

Outlining a structure designed by her and colleagues at the law firm Morgan, Lewis & Bockius, Ms Dillon said President-elect Trump wanted Americans to have no doubt that he was “completely isolating himself from his business interests”.

The trio in charge “will make decisions for the duration of the presidency without any involvement whatsoever by President-elect Trump”, she said. 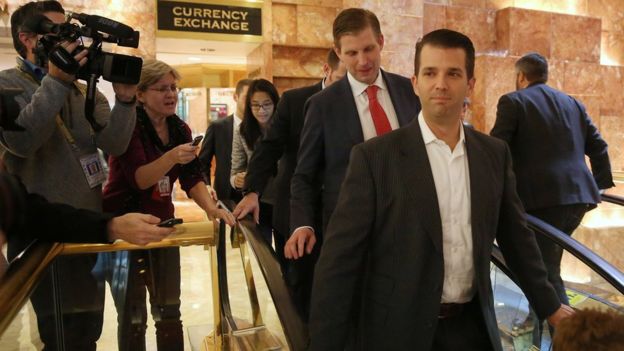 Soon after, Mr Shaub said that the arrangement would not remove conflicts of interest for Mr Trump since, unlike in a blind trust, he would still see information about the businesses and deals being made in the newspapers and on television.

“His sons are still running the businesses and, of course, he knows what he owns,” he said at the Brookings Institution think tank in Washington DC.

“Nothing short of divestiture will resolve these conflicts.”

If Mr Trump and his lawyers thought this was going to satisfy the ethical and constitutional concerns that have been raised, they’ll need to think again.

“As I listened, my jaw dropped. Trump’s workaround is a totally fraudulent runaround,” tweeted Professor Laurence Tribe of Harvard University, one of the leading constitutional lawyers in the US.

“Trump’s announced structure is cleverly designed to dazzle and deceive, but it solves none of the serious ethical or legal issues. Trump’s lawyer would flunk constitutional law at any halfway decent law school. At least if the lawyer wasn’t just joking.”

The biggest objection arises from the so called emoluments clause of the US constitution. It expressly forbids anyone in government from receiving gifts or benefits (“emoluments”) from foreign powers. If Donald Trump still owns his companies, then even if he’s not managing them, the argument goes, he will still be the beneficiary of many of the Trump Organization’s foreign businesses.

Professor Richard Painter, who was President George W Bush’s chief ethics lawyer, stated frankly: “The plan we heard today does not comply with the law.”

Professor Norman Eisen, who did the same job for President Obama, agreed with that and also offered an ominous forecast for the president-elect.

“What Donald J Trump has done today is contrary to the most fundamental law of the United States of America,” he said. “The emoluments clause is no minor feature of the constitution… So these conflicts of interest are core. I do not believe that any of the branches of government will stand for it.”

The ethics agency director compared the Trump plan to what he characterised as secretary of state nominee Rex Tillerson’s successful efforts to make a “clean break” from Exxon, where he was chairman and chief executive.

Although presidents are not subject to the same conflict of interest rules as other government employees, previous commanders-in-chief have placed their investments into a blind trust to prevent any question of corruption.

The Office of Government Ethics is not an enforcement body – it is there to guard against government members being involved in conflicts of interest.

Mr Shaub said the OGE was waiting to assist Mr Trump if he decided to “adjust his plan”.