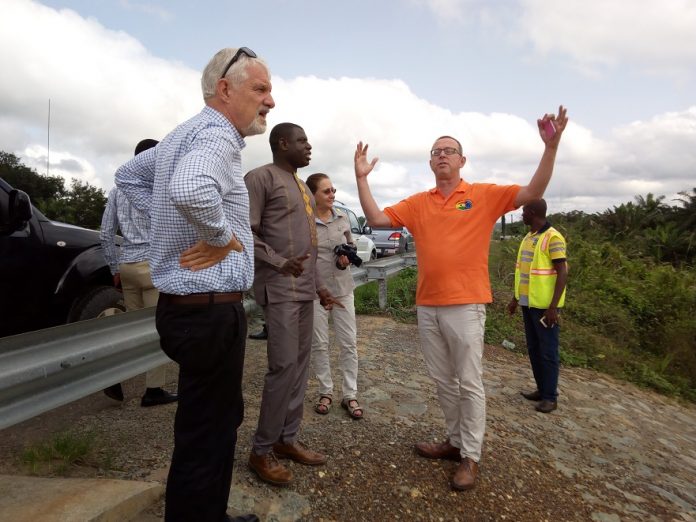 Ambassador William Hanna first paid a courtesy call on the Chief Executive for Tarkwa Nsuaem Municipality, Hon Gilbert Ken Asmah. in his office to have some deliberations key among which include the non availability of drainage system at certain key areas on some portion of the road which he believes is a recipe for erosion, he further mentioned the lack of road signs and markings especially on climbing lanes to serve as warning to heavy duty trucks. He further commended the EU delegation for the support and promised to offer them his support in all endeavours.

Mr William Hanna and his team, Hon Gilbert Ken Asmah and Highway Engineers proceeded the inspection tour to Bogoso where the team was welcomed by Hon Mozart Owuh, DCE for Prestea Huni-Valley.

During the discussions at the Prestea Huni-Valley District Assembly, The EU Ambassador disclosed that his visit will enable his outfit identify some of the emerging challenges after the interim handing over a year ago. “We are here to inspect the projects and take notice of all the problem so that we will profess remedy to them as required in the contract agreement, after which the official and technical handing over will be done”.

He was quick to admit that the Western Region contributes largely to Ghana’s socio economic growth and therefore needed more road infrastructure; especially in the area of agriculture so as to enable farmers get easy access to their farms and also transport their produce to the market.

Hon Mozart Owuh for his part outlined lack of branch or trunk road access as some of the challenges encountered after the interim handing over was done, again he cited wrong spellings of some towns and village names on some sign post, touching on safety, he mentioned lack of Bollax, specifically on the climbing portions of the road to serve as a support for fallen vehicles in the unlikely event.

In the area of Industrialisation,
The EU Ambassador hinted that EU has a policy of working with Local Authorities for the reduction of poverty in partner countries such as Ghana. We have a number projects that will be incorporated in the One district One factory policy to create more jobs for the teeming youth, he said.

This policy constitutes the basis for the grant contract between the EU and the Western Region.

This grant he explains, has facilitated the collaborative engagement with relevant stakeholders in the field of Agriculture and such we believe that the planting for food and jobs will not be left out either in our policy framework as development partners.

It is the expectation of the European Union that this support will strengthen the Western Regional Coordinating Council in the execution of its core mandate and for the attainment of the laudable objectives contained in the Government of Ghana’s medium term policy framework.

He mentioned that the Minister for Development at EU will be paying a courtesy call on the President of Ghana in the coming days.

Avoke finally in as UEW VC – Unity, Reconciliation and Peace is key