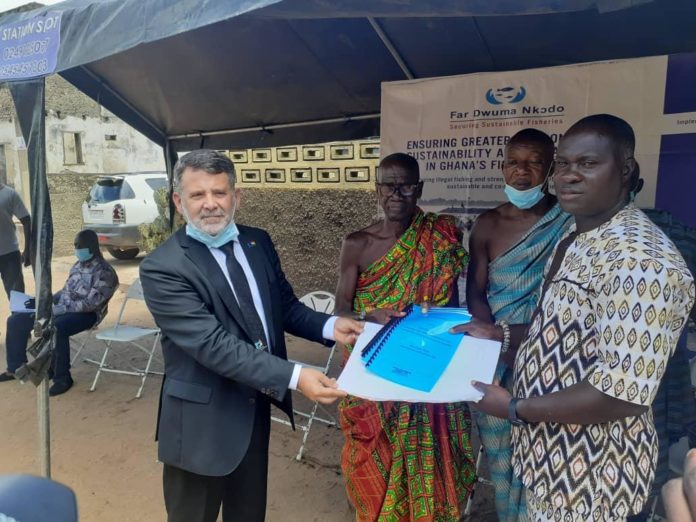 The European Union (EU) has called on the Government of Ghana to do everything in its power to end the illegal trade of Saiko before the practice destroy the entire sector.

Saiko is a destructive form of illegal fishing, where industrial trawlers target the staple catch of small-scale canoe fishers and transfer it to specially adapted boats at sea for sale at local markets.

He expressed disappointment that the activities of saiko goes on openly and unabated on Ghanaian waters.

In 2017 alone, the saiko trade took around 100,000 tonnes of fish, worth over US$ 50 million when sold at the landing site, 80 percent of which was landed at Elmina, the Central Region hot spot for saiko activities.

Mr Roberto Schiliro, Team Leader and Head of the Sector Infrastructure and Sustainable Development Section, EU Delegation in Ghana who made the call described “saiko” as a canker that should be completely eliminated.
He was speaking in an interview with the media following the handing over of an indenture of the duly registered British Komenda landing site to the community on Monday.

The move was carried out by the Environmental Justice Foundation (EJF) and Hen Mpoano, implementing partners of the “Far Dwuma Nkodo” project to secure landing sites for fishing communities in the context of coastal development.

Mr Schiliro said Saiko was the single most undesirable illegality that was fast depleting the fish stock in Ghana’s marine waters which must be tackled with all seriousness.

“The artisanal fishing represents an important portion of Ghana’s economy. They employ over three million of the Ghanaian people. So they deserve the attention. It is a productive sector and its importance must not be underestimated”, he stressed.

Mr Schiliro pledged the commitment of the EU to end illegal fishing practices in all forms including; saiko and called on all Ghanaians to join the fight for greater sustainability of country’s fish resources.

“I can tell you that the EU is ready to take all the measures, which are in our capability to be taken for the perpetrators of this illegality.We will do all that is necessary from the very top of our administration to end saiko”, he said.