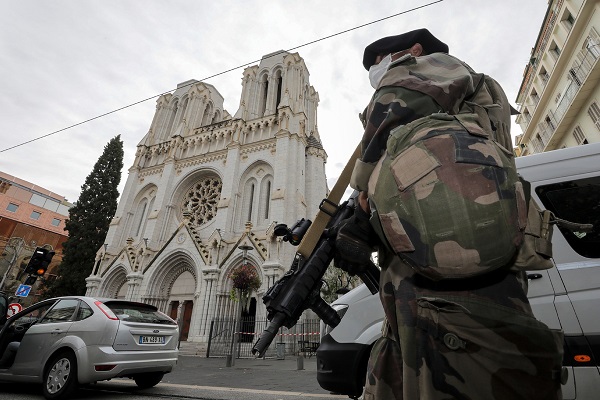 The leaders of the European Union (EU) issued a joint statement condemning “terrorist attacks” in France, after the latest one in Nice left at least three dead and several injured.

“We, European Leaders, are shocked and saddened by the terrorist attacks in France. We condemn in the strongest possible terms these attacks which represent attacks on our shared values,” read the statement.

Vowing to continue the “fight against terrorism and violent extremism,” the leaders called on their counterparts around the world to “work towards dialogue and understanding among communities and religions rather than division.”

We need to stand together to defend democracy, the rule of law and fundamental freedoms,” said Michel. “No one should doubt Europe’s solidarity with France. We are united and determined in the face of fanaticism and barbarism,” said von der Leyen.

Trudeau also offered condolences to France. “There is no place for violence and intolerance in our society. We wish to demonstrate our solidarity with France and its people in the face of these unjustified and unjustifiable acts,” he said.

An investigation has been opened into the knife attack that took place on Thursday morning at the Notre-Dame basilica in the heart of the city of Nice, southeastern France.

The French national anti-terrorism prosecutor’s office said it would investigate the incident under “attempted assassination in connection with a terrorist enterprise.”

France has been on high alert after a knife attack near the former office in central Paris of the satirical magazine Charlie Hebdo on Sept. 25 and the beheading of a history teacher outside a middle school in a Paris suburb on Oct. 16.