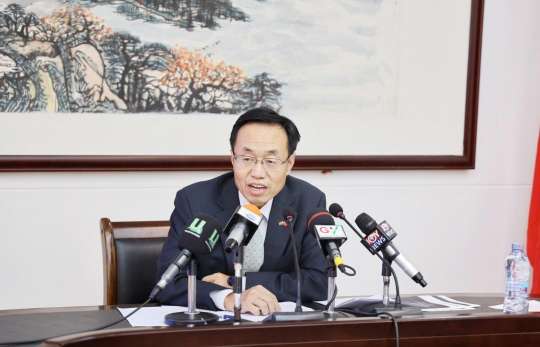 Mr Shi Ting WANG, the Chinese Ambassador to Ghana, on Thursday called on Ghana not to evacuate its nationals from China as the act will increase the risk of Coronavirus (COVID-19) infection in the Country.

He said this was necessary as the long distance international travel could possibly increase Ghana’s chances of COVID-19 infection just as the U.S. and other countries recorded after they evacuated their nationals.

Mr WANG told journalists at a News briefing in Accra on the situation of the COVID-19 outbreak that though the concerns of Ghanaian students and parents were genuine, it was safest for foreigners to stay in China and abide by the COVID-19 prevention measures by the Chinese government until everything was over to ensure their safety.

“It is safe for Ghanaian students to stay in China at Present.

The Chinese government will ensure that they have sufficient food, drinking water and other logistical support. We will also provide excellent medical service if necessary,” he stated.

He said every university in Wuhan had set up special working teams to take care of the foreign students, which included Ghanaian students.

Mr WANG noted that the foreign office of Hubei have put in place the needed measures to ensure that no student is infected as well as providing them with a 24-hour counselling hotline to relieve their anxiety and panic.

Meanwhile, the Chinese Embassy in Ghana is working closely with the Ministry of Foreign Affairs and Regional Integration, Ministry of Health and the Ghanaian Embassy in Beijing to strengthen the protection of students in China.

He commended the Ghanaian government on its scientific approach and timely response in the face of the epidemic, adding “we believe that under the joint efforts of both sides, Ghanaian students in Wuhan are safe now”.

Currently, about 151 Ghanaian students are staying in Wuhan.

The number of newly confirmed cases in provinces except Hubei dropped from 890 on February 3 to 45 on February 19.
Mr WANG said as at February 19; 2,118 people had died of COVID -19 nationwide, with a mortality rate of about 2.5 per cent compared to 10 per cent for the SARS epidemic, 35 per cent for the MERS epidemic and about 50per cent of the Ebola epidemic and 0.6per cent in provinces except Hubei.

He said there were tens of millions of foreigners in China with half a million as foreign students and as at now only 27 foreigners were infected with COVID-19 in China and only two of them died of the virus.

Mr WANG said there was only one African student in China infected and had already been cured and discharged with no Ghanaian student infected.

He said the COVID-19 affected 25 countries with 1,051 people infected and seven deaths outside China, adding that most of the confirmed cases outside China occurred due to the evacuation of foreigners.

He noted that effective drugs were developed to help in the treatment of the disease and assured that China was confident and had the capacity, resources and determination to win against the epidemic.

Meanwhile Ghanaians have been advised to also continue with the safety measures; proper handwashing with soap under running water, and covering of mouth when coughing or sneezing to prevent the disease.