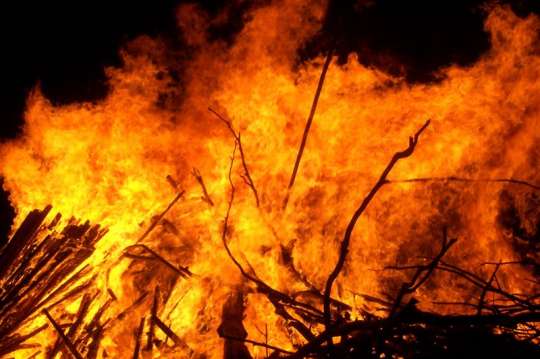 A fire that erupted in Orange County’s canyon country late Wednesday quickly jumped into the nearby hillsides, whipped by Santa Ana winds and fueled by bone-dry brush.

The Bond fire nearly quadrupled in size in just a few hours, exploding to about 7,200 acres by Thursday afternoon.
About 25,000 residents live in a mandatory evacuation order in effect for Silverado Canyon, Modjeska Canyon, Williams Canyon, Black Star and Baker canyons and portions of Portola Hills and Foothill Ranch, the Orange County Sheriff’s Department said.

For the second time in five weeks, Patrick Day packed up his photo albums, clothing and documents and prepared to evacuate.

The 51-year-old’s Lake Forest neighborhood of two-story stucco homes was littered with deflated Christmas blowups and tinsel and lights hanging from balcony railings as ash fell like snow from the December sky.

“It’s shocking that fire season is still going on into December. It seems like every time there’s winds, a fire breaks out,” said Day, whose family was ready to leave by 10 am and planned to stay at a friend’s hotel in Anaheim.
“So much of the hillside burned in the last fire and there’s so little left to burn, so I’m not so sure how big of a risk there is to my home.”

Two firefighters were injured battling the blaze, which was 0 per cent contained. Officials with the Orange County Fire Authority said the injured firefighters had been treated by paramedics and taken to a hospital.
Officials also said multiple structures may have been damaged by the blaze.

“We are in the process of verifying the number involved and the extent of the damage,” the Orange County Fire Authority wrote on Twitter.

Voluntary evacuation warnings were issued for areas spanning from Trabuco Canyon to north Tustin.
A temporary Red Cross evacuation point was set up at Santiago Canyon College in Orange. Because of the Covid-19 pandemic, authorities said no congregate shelter was available and urged evacuees “to seek safety with family/friends or in a hotel.”

Judy Smith, a 48-year-old from Lake Forest, stood by her car outside the Red Cross area Thursday afternoon.
She had anticipated spending the week isolating at home after developing a mild cold and showing pre-Covid symptoms.

Instead, she spent hours in her car trying to find hotel accommodations with a separate room for her daughter, who was perched in an adjacent car.

“We’ll be OK. It’s an unfortunate timing,” Smith said. “I’m going to see what I can do to isolate from my daughter.”

Around 70 cars had come for assistance by 1 pm, said Red Cross officials, who were prepping to find a new location as the evacuation zone was encroaching on their locale.

Sepehr Roshan of Pomona was awoken early Thursday morning with a notice that his aunt’s home was in an evacuation zone.

She has abdominal cancer and evacuation proved difficult five weeks ago, during the Silverado fire. The air quality did not help her health, so the 53-year-old Roshan drove to Orange County to help his family find accommodations and prepare to leave if needed.

“She’s bed-resting right now, but it’s tough. She doesn’t really want to leave her house because it’s her comfort zone,” Roshan said of his aunt. “We made sure all the windows and doors are closed and the air purifier is on at all times.”

“The big challenge we have here is not only the topography, the contour of the hillsides, but the wind,” Nguyen said. “In addition to that, the winds come with low relative humidity. [Humidity] is in the low teens, and that makes the fuels susceptible to burning.”

The Fire Authority reported just after 11 pm Wednesday that a structure fire had extended into nearby vegetation, and that firefighters were on the scene, with fire helicopters and a helitanker assisting.

The winds spurred at least three other fires in Southern California. In San Diego County, a brush fire that erupted in a belt of undeveloped land south-east of El Cajon on Wednesday night destroyed at least one home and damaged six others.

Brief evacuations were ordered, but firefighters were able to get the blaze under control, and by 7 am, it was 50 per cent contained after burning about 30 acres.

In Riverside County, two wildfires were burning Thursday. A small brush fire broke out Tuesday evening near Corona Airport and then swelled to 500 acres in two days.

As of 6:30 am Thursday, it was 0 per cent contained. It was not threatening any structures, officials said. Elsewhere, the Cerritos fire sparked overnight, quickly singing 200 acres and forcing residents to evacuate from the Nuevo community.

One resident of Silverado Canyon who declined to give his full name, said his power was cut around 7 pm Wednesday.
He and his wife left their home at 11 pm, shortly before firefighters and sheriff’s deputies rushed through their neighborhood, instructing them to evacuate.

“This fire literally started feet away from us. We hightailed it out of there,” the man said. “It was made a lot more challenging by the fact that we were in the dark and there’s no cellphone service, so we were quite literally in the dark.”

With flashlights in hand, he and his wife grabbed everything they could think of in 10 minutes and fled.
As of Thursday afternoon, more than 50,000 customers were without power, including 1,600 customers in Orange County, 9,900 in Los Angeles County and 24,000 in Riverside County.

Nearly 250,000 additional customers are under consideration for a shutoff as well, according to SCE spokesman Ron Gales, including an additional 14,000 in Orange County.