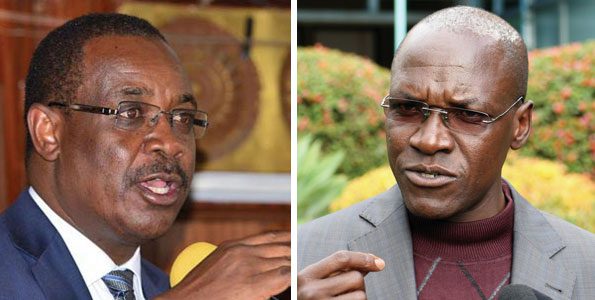 Ahmednasir alleged that Ojienda is also in the mix of the finance crippling of Mumias Sugar Company having been paid Sh280 million for services he did not render.

?Senior Counsel Ojienda should be the first to exit from this case since he has been named in the audit report by Pricewaterhousecoopers over Mumias Sugar Company?s (MSC) collapse,? Ahmednasir said.

Ahmednasir made the scathing attack during the start of the hearing of the defamation suit in which Kidero has obtained orders restraining Senator Khalwale from linking him to the collapse of the once vibrant MSC.

Kidero sued Khalwale after the latter refused to apologise over statements he made linking him to MSC scandal.

Ahmednasir further urged Justice Joseph Sergon to disqualify himself from the matter saying he is impartial.

Ahmednasir came on record for Khalwale for the first time yesterday but Ojienda strongly opposed his participation in the proceedings leading to an adjournment.

Ojienda hit back saying Ahmednasir should disqualify himself having been appointed in 2010 by Law Society of Kenya to arbitrate a financial dispute between MSC and its outgrowers firm, Mumias Outgrowers Company.

?We have annexed tweets by Senator Khalwale and he cannot runaway,? Ojienda said.

Justice Sergon extended the gag orders against Khalwale until September 3, when the court will give further directions.

By Fred Makana, The Standard