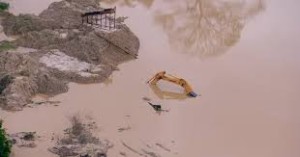 The Galamsey issue and the wanton destruction of the land, water bodies and forestry resources of Akyem-Abuakwa, the land of my ancestry, at least a crucial part of my ancestral history, provenance and upbringing, is one that I have agonized over for quite a considerable while now. Which is why I fiercely fought in the media for the realization of the presidential ambitions of Nana Addo Dankwa Akufo-Addo. For it did not take me very long to come to the painful realization that it was only a native son of Okyeman – or Akyem-Mansa, namely, Abuakwa, Kotoku and Bosome – who could tackle this apocalyptic menace frontally, swiftly and effectively. So, I naturally feel indescribable pride and exhilaration that it is the Akufo-Addo Administration that is most likely to go down the pages of our history books as the one government that singularly distinguished itself as the most caring about the imperative need for the repair and preservation of our national ecological system, if the future existence and prosperity of Ghanaian humanity was to be guaranteed.

It is still yet morning on Creation Day, as the immortalized genius Nigerian novelist, essayist and thinker Professor Chinua Achebe once observed. Of course, what this means is that the Akufo-Addo/Bawumia government is still young and faced with enormous problems in need of radical and immediate solution. Indeed, as our Akan sages of yore once observed, “The success of any market day can be espied at daybreak.” I came to this piece a bit heavy-hearted because it was a chance reading of the obituary of Nana Kwame Adjei-Boateng, aged 49, that brought me to this discursive subject. The deceased was my blood relative and a cousin of the Okyenhene, His Majesty, Osagyefo Amoatia Ofori-Panyin, II. But that is about the extent of their relationship to the best of my knowledge, at least as yours truly came to publicly witness the same.

I had the occasion to write about these two relatives and the seemingly intractable Galamsey menace a while back, when the deceased was widely reported by the media to have virulently accused The Okyenhene of being the functional equivalent of a Field Marshall of the inexcusably predatory and wantonly destructive Galamsey activities. Well, for those of our readers who are hearing the word for the very first time, “Galamsey” is the term commonly used to refer to illegal strip-mining in Ghana. Akyem-Abuakwa has been known to be the one traditional enclave of the country that has been the most extensively devastated by such illegal mining activities. I must also quickly note here that unlike Osagyefo Amoatia Ofori-Panyin, II, I did not personally know the late Nana Adjei-Boateng.

The problem we are faced with here, though, regards neither the fundamental illegality nor the wanton destructiveness of Galamsey, per se, but rather the outrageously apparent glee with which the primary political opponents of the now-President Akufo-Addo, who were in a position to rectify this environmental menace but instead chose, on more than several occasions, to publicly and heartlessly celebrate, nose-thumbing fashion, the perennial and systematic destruction of the lands, water and forestry resources of the people and residents of Akyem-Abuakwa. Former President John Dramani Mahama even had occasion to literally thumb his nose at Osagyefo Amoatia Ofori-Panyin in front of a full-session of the membership of the Okyeman Traditional Council at the Ofori-Panyin Fie or Palace in Kyebi, by calling the royal capital of Okyeman the “Galamsey Capital of Ghana.”

But, of course, what is even more significant to painfully observe vis-à-vis the untimely passing of Nana Kwame Adjei-Boateng, is the legal feud that existed between one very prominent Paramount King and his “Odehye” at the time of the latter’s demise. As of this writing, there was at least one media report indicating that Nana Adjei-Boateng was to be afforded a State Funeral on the foregrounds or forecourt of the State House, also known as Job-600. On the couple, or so, occasions that I have had the privilege of informally and courteously querying The Okyenhene as to whether he was either directly or indirectly involved in Galamsey activities, he has pointedly denied it and quickly pointed out that it was the central government in Accra that controlled the legitimate coercive apparatus of the country and therefore was uniquely positioned to put an immediate end to such morally withering and existentially destructive activity.

Osagyefo Amoatia Ofori-Panyin may be absolutely right; except that when a remarkable number of traditional rulers, including the Aburihene, and a slew of blood relatives, decide to ride in the vanguard of the train of one’s most virulent accusers, then, of course, there is great cause for concern; for then, of course, the issue would have moved far away from merely being a purely personal scuffle between just one chieftain, however prominent and/or distinguished, and a handful of legitimate pretenders to the same, into one verging on institutional crisis and patent illegality.

I am also quite certain that the spirit and/or soul of Cousin Adjei-Boateng is sedately resting where it needs to be. And his corporeal evacuation is equally certain to be graced with the fitting honor of tomorrow’s State Funeral in the forecourt of Job-600. And then, hopefully, that leaves the rest of us poised to putting Ghana’s lands, water bodies and forestry resources in a better condition than we inherited. For this, we are told, is what Odehye Adjei-Boateng unwaveringly stood for. Adieu, blood brother. May there be peace at the place of your destination.