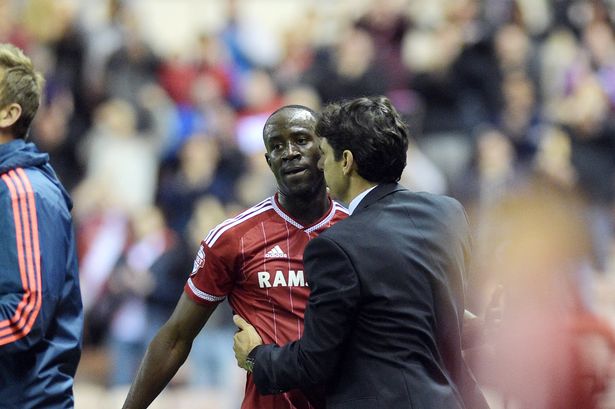 Bernie Slaven thinks that everyone at Middlesbrough handled the Albert Adomah situation well.

Brilliant. Albert Adomah burst back into the picture with goal.

It was important that he did that. When you have been frozen out and you get the chance to prove a point you have to take it.

And Albert did that. He came off the bench, he got an assist, he got a goal and celebrated with the boss.

He showed that he is an important player. He came off the bench and changed the game ? and to be honest the MK Dons game was crying out for him to change things too.

And I think maybe for him it was important that he did that in public.

The whole story with Albert Adomah has been played out in public and every man and his dog has had their say and taken sides on social media and everything has been analysed to death, even though no one even knows what actually happened.

So it is good that gesture was made in public. If he hadn?t celebrated like that people would have found a problem there and say things were still frosty.

Now its done. Albert is back in the team. He?s scored. Everyone has seen him hugging Aitor and we can draw a line under it.

But he?s back now and back in style. Good. Now we can forget about a storm in a tea-cup and we can all move on.

I always did the same as he did. Whenever I had been dropped for whatever reason ? and especially after a spat with the manager ? I always bust a gut when I got back in and I usually scored a goal.

Mind, there?s no way I would have sprinted to the dug-out and cuddled Bruce Rioch. And definitely not Lennie Lawrence!

When I saw Albert running over I thought: ?No way! He?s never going to jump in Aitor?s arms is he?? But he did.

And Albert is that kind of guy. That?s his character. He?s very open. He very emotional. Very demonstrative. He wears his heart on his sleeve.

To be honest, I think everyone has handled the situation well.

Whatever the disagreement was, Karanka never said a thing in public and kept insisting Adomah was still an important player for Boro. Albert stayed quiet too.

No one poured petrol on the flames. That makes it easier to build bridges when a player returns.

And of course, Boro have been winning while he has been out.

Had they been losing games then Albert would have been seen as a stick to beat Karanka with.

But Boro were winning games so Karanka could take his time and bring Albert when he was good and ready.

And of course, Boro won on Albert?s return. That was important too.

It makes Karanka look like a very shrewd manager, judging his moment well and playing a winning hand, bringing a crowd favourite back at just the right time.

But the truth is you can?t really plan things like that. It worked out well but it might not have. Everyone got away with it which is great for Boro,

I don?t think Adomah is back as an automatic choice on the right like he was before though.

Aitor know snow he has other players who can do that job and Boro have won three games in a row without Albert. There are alternatives.

So it is great that Albert is back and for me he is more than good enough to be a starter in this team ? but he as no guarantee and he needs to work hard to get a shirt now.

Norway introduces fresh restrictions amid ‘social break for everyone’