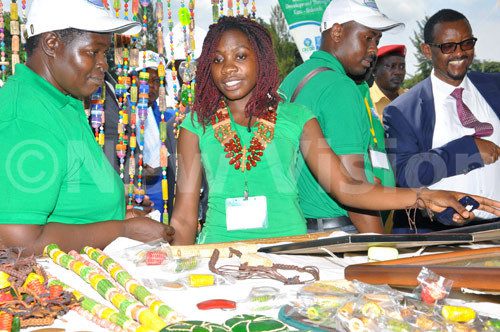 ?They are enjoying their right to procreate and survival,? Flavia Munaba the state minister of water and told the celebrants of World Environment Day.

?We need to observe that everything God created has a right to survive.?

Munaba was responding to remarks made by the Rakai resident district commissioner, Charles Mubiru who said elephants and hippopotamus among other wild animals had invaded the district and caused untold suffering to the residents.

??People are suffering because wild animals have invaded their homes and they are threatening to kill them,? Mubiru said.

The President?s representative appealed to government to rescue the situation before residents kill the animals which earn government revenue through tourism industry.

The minister argued that elephants are relocating from Zambia, Zimbabwe and are heading to South Sudan to look for food.

Munaba blamed residents for encroaching on the animals? land (game parks) and therefore, they should be prepared to face consequences.

The minister was speaking during the celebrations to mark World Environment Day at Kiteredde Secondary School in Rakai district.

The national environment celebrations were held under the theme: ?35 million people. Limited resources. Consume with care.?

?You have decimated the animals? environment and therefore, you should learn to live with them side by side,? Munaba said.

She called for a law of co-existence between animals and the people.

Mubiru asked government to come up with a law that would make landlords to plant trees in every land their own.

The deputy secretary general of East African Community (EAC), Jesca Eriyo implored partner states to start planning properly on housing as the population grows and yet the land is still the same.

She noted that by 2050 the Uganda?s population is estimated to grow to 100 million people from the current 34.5 million and therefore, government should plan for adequate housing.

Eriyo proposed that it is high time families started building stored houses to accommodate the growing population with limited land.

The UNDP team leader energy and environment Onesimus Muhwezi emphasized the need to conserve the environment as 90% of Ugandans use firewood for energy (cooking).

?This puts enormous pressure on the natural resources and it should be addressed,? Muhwezi said.

He lauded government for efforts made so far in conserving the environment but also called for renewed commitment in designing environment policies that work.

The area MP Haruna Kyeyune warned residents not to deplete forests but conserve the environment.