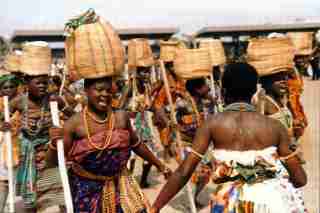 A communique issued at the just ended conference on Building an Inclusive Nation – Dialoguing with Volta and Oti Regions has called on Ghanaians, who still hold the erroneous perception that Ewes are not bonafide Ghanaians to discard such falsehoods.

The conference was organised by the National Peace Council and was attended by Paramount Chiefs, Divisional Chiefs, Queen Mothers, the Clergy, the Academia, Civil Society, Women and Youth Groups.

It was a follow-up to a series of dialogue meetings held by the Council last year in some 18 communities in both Volta and Oti Regions to discuss claims of discrimination against people in the two regions and to promote national cohesion and peaceful coexistence.

The communique reaffirmed that the Eʋe and other ethnic groups from the Volta and Oti Regions were bonafide Ghanaians, whose forebears mainly inhabited the Trans-Volta Togoland joined the Gold Coast through a plebiscite in 1956 to form Ghana on 6th March 1957.

The communique expressed serious concerns about the long-held erroneous perception among some Ghanaians that Ewes were aliens or non-indigenous Ghanaians, who came from Togo to join Ghana after independence.

It noted that such erroneous misinterpretation of history by some tribal bigots and demagogue politicians, have occasioned adverse discrimination against the Eʋe in the administration of birth certificate, national identity card, passport, voters’ registration, and elections in contravention of the Constitution and other legal provisions on Ghanaian citizenship.

The communique urged the removal of nuisance-in-land, fear-invoking security and immigration barriers and checkpoints at communities such as Asikuma, Leklebi, Liati, Sogakope, and Juapong and encouraged strengthening security presence and patrols at the borders.

The communique condemned the persistent and deliberate stereotyping of the Ewes and the use of abusive and denigrating discourses and clichés against the Ewes noting that such stereotyping discourses lead to scapegoating and dehumanisation, which were interlinked to social-psychological processes that tended to create and nurtured enemy images.

It noted that these social-psychological processes frequently worked together against social cohesion and became the precursors for mass violence, determined that such stereotypical discourses deliberately targeted at denigrating the Ewes positive self-identity were threats to national cohesion and sustenance of the peace of Ghana.

The communique noted Ghana’s international reputation and commitment to human rights and called upon the Government to release all the 52 citizens arrested for their alleged roles in the secessionist’s attacks in the Volta region as their continued detention without trial for two years was a gross violation of their human rights.

It reiterated regret over the luring of some innocent unemployed youths into participating in the September 2020 violent attacks on state installations in parts of the Volta Region and found nothing wrong with prosecuting the real culprits of the attacks.

The communique also urged the State to identify conducts that could impede the realisation of its aspirations and then legislate against such conducts, called upon the Government of Ghana to promulgate a law to be called “Fair Appointment and National Cohesion Law” along the lines of Kenya’s National Cohesion and Integration Act, 2008, to give effect to Article 35(6) (b) of the Constitution, 1992.

It urged the Government to prioritise construction of the Keta Sea Defence Expansion Project and the Keta Port to create jobs for the teaming unemployed youth, resource the Ho Teaching hospital and put up a regional hospital in the Oti Region, improve and upgrade the Ho sports stadium to international standard and replicate the same in the Oti Region.

The communique also urged the Government to hasten the completion of the Eastern-Corridor Road and all other major roads that were under construction, complete the uncompleted educational infrastructure Volta and Oti Regions, ensure fair and adequate distribution of teaching and learning materials, and fair distribution of personnel and support this with motivation and incentive packages.

Global mobilisation required to save education systems in Africa