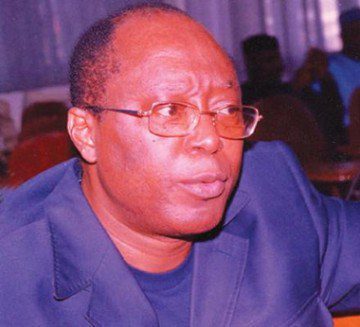 A former governor of Edo State, Prof Oserheimen Osunbor, has said he decided to dump the Peoples Democratic Party (PDP) for the All Progressives Congress (APC), because the PDP does not have the interest of the people at heart.

Speaking at a rally, where he formally decamped to the APC, on Tuesday, Osunbor said: ?Back in February 2012, I reflected on my journey in politics and realised that the people in my party ? at that time (PDP) ? did not have the interest of the people of Edo State in mind and that was why, during that election I cast my vote in favour of Comrade Adams Oshiomhole Governor. I told all my supporters across Edo State to give their votes to him and what did we see? 18 over 18.

?I did that because I was convinced that the Oshiomhole has the interest of the ordinary people at heart.?

Osunbor added that: ?I have been supporting the APC and, in the election of two weeks ago, I cast my vote for the candidate of the APC and I told my supporters to vote for APC candidates. I also reflected and saw that within APC are my friends. Why should I be in exile while my friends are in APC? I decided to come home from political exile to realign with the APC in Edo State. The government at the Federal is APC and the Government at the state level is APC, what will you benefit if you vote for PDP?

In his response, Governor Adams Oshiomhole said, ?today, for me, is historic for several reasons. This is the first formal public display of the bond of unity, friendship and comradeship between Osunbor and I. I am sure you all know that I took over from Prof. Osunbor under very hostile condition and today it is to his credit, his large heart and my own purity of heart that whereas governors who smoothly change power today are at war against each other in many parts of Nigeria, in Edo State, the immediate past and the present are bonded together by the broom in a common commitment to work and sustain positive changes in our state and, indeed, in our great country.?

Oshiomhole added: ?Prof. Osunbor, I want to thank you for your courage and for putting the bigger issue before the smaller issue and, as you said, demonstrating, publicly, what you have always done with us privately. May God bless your decision and all those who have come with you in their renewed hope in our mission of change.?

He continued: ?The election that took place last week has already settled one major problem that we have had in this state, the problem of political godfatherism. That is now buried forever and history will record it in our favour that, together, we buried godfatherism in our state and in the country.?

While admitting the Osunbor into the APC family, Oshiomhole assured that a bigger ceremony would be held at the Samuel Ogbemudia Stadium to receive him.

Man Hangs Himself Over Girlfriend

‘Suicide belt’ Found On The Streets Of Paris