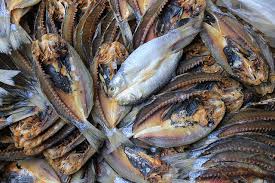 A Greek Medical Team (GMT) has warned Ghanaians, particularly, those in poverty stricken, areas against excessive consumption of pepper, salt and dried fish to prevent them from contracting ulcers and cancers. Professor Xemophon Yataganas, President of the Greece Medical Mission, which offered free medical screening and treatment in some districts of the Northern and Upper East Regions, gave the warning, on Friday, in Tamale when it briefed management of the Savanna Accelerated Development Agency (SADA) after completing its mission.

The team was in the country at the request of the Savanna Accelerated Development Authority to screen and treat ailing people in SADA regions to ensure that those who had no means to receive quality healthcare were attended to free of charge.

Prof Yataganas, who led the five-member medical team, explained that excessive intake of pepper and salt on almost an empty stomach could easily cause ulcers or cancers while dried fish contained some amount of salt, which must also be consumed in moderation.

He noted: ?On our mission, we observed that the people are poor and they eat at irregular intervals with a lot of pepper and salt in their food, which cause ulcers and other abdominal pains.

?They also eat dried fish a lot and there is some amount of salt in dried fish, which the people consume, unnoticed?.

He expressed concern about the unavailability of public toilet facilities in some of the places they visited, leading to open defecation, which he said, resulted in cholera and other communicable diseases.

The team, known as the Heart Doctors, arrived in Ghana in October 15, and embarked on a medical mission in Weisi and Uwasi in the Builsa North District, Kotintaabik and Yakoti in the Nabdam District all in the Upper East Region; Gambaga, Kulgona in the East Mamprusi District and Jesonayili in the Sagnerigu District of the Northern Region.

About 6,000 people, including children, the elderly, persons with disabilities and the Gambaga alleged witches were screened and treated.

Prof Yataganas expressed appreciation to management of SADA for establishing a partnership with them and stressed the need for further collaboration in healthcare delivery.

He gave the assurance that the team could mobilize resources to return to Ghana for similar missions.

Mr Charles Abugre, Acting Chief Executive Officer (CEO) of SADA, commended the team for responding to SADA?s request for the collaboration and appealed to the team return to render their humanitarian services in other areas.

He said SADA would not relent in its efforts of working hard to alleviate poverty and disease in its operational regions to better the lives of the people.

He said SADA would also consider identifying the most remote areas where the people lacked the means to attend the nearest health facilities and would provide tricycle motors for conveying sick persons and pregnant women to health facilities.