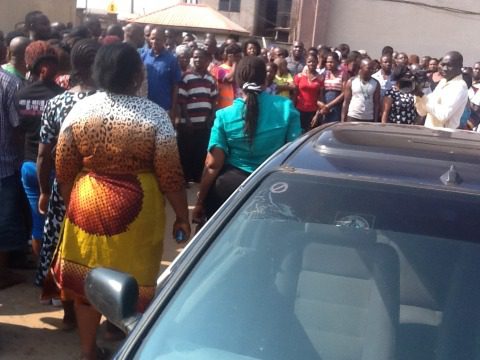 No fewer than 100 customers of the Enugu Electricity Distribution Company (EEDC) on Wednesday besieged the company?s business office in Awka, to protest epileptic power supply and excessive tariff by the company.
The protesters under umbrella name of Zik?s Avenue Business Owners Association, Awka, said that their businesses were collapsing because of poor power supply.
The Vice Chairman of the traders, Mr Ik Okafor, said that besides the poor power supply, the company officials issued them excessive tariffs through estimated bills and fixed charges.
According to him, there was a period some parts of the area did not have electricity for about seven months, yet those operating businesses in the affected areas were issued with bills to pay.
Okafor said that they were forced to embark on the protest because some officials of the company came to disconnect the electric facilities in their area.
?The management of the company should come and restore electricity in our area and provide us with pre-paid metres so that we can pay only for the electricity we enjoy,? Okafor said.
Also speaking, Mr Joseph Akabueze, who said that he has been in darkness for seven months, accused staff of the company of demanding N5,000 fixed charge or risk being disconnected.
?I petitioned the management against the charge but they still insisted that I pay the amount otherwise they would disconnect me from their services,? he alleged.
Another aggrieved customer, Mr Bonvera Ndubuisi, expressed disappointment that no staff member of the company came out to address them.
?We will resist any attempt by the company?s workers to disconnect electricity facilities in our area,? he threatened.
Reacting however, the Communication?s Officer of the company, Mr Ositadinma Ugwuafor, denied the claims that electricity was not supplied to Ziks Ave. in the past seven months.
?They did not come to protest because there is no power supply; they came because we went to collect revenue for the electricity consumed.
?The person, who prompted the protest, owes N84, 000 while his neighbor owes N120, 000; he called his group when we came for our revenue.
?We want a win-win situation whereby they use electricity and pay accordingly; if anybody does not pay, he does not want us in business,? Okafor said.
He called on customers to kindly ensure prompt payment of electricity bills, saying that the corresponding naira worth of electricity was used to maintain the network and facility in serving customers better.

GLO customers to be moved unto AIRTELTIGO network from April 23