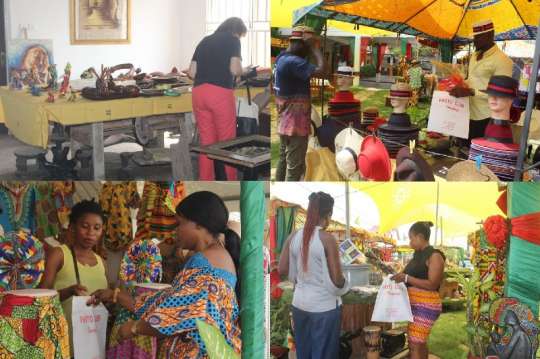 Exhibitors at the ninth African Arts, Crafts and Fashion Fair have experienced low patronage at the early stages of the fair but have expressed hope in cashing in some sales before the end of exhibition.

The exhibitors called on both locals and foreigners to pass through the fair and make purchases, which could be presented as gift to loved ones or used for decorating rooms especially in this season of celebration and reflection.

The 10-day Exhibition organised by the African Arts and Culture Development (AACD) – African Market started on December 19 and is expected to end on December 29, seeks to create a platform for the showcasing of the rich Ghanaian and African culture.

The Ghana News Agency, at the weekend, visited the AACD – African Market at the East Legon near the ‘A and C’ Mall, where the fair is being held to find out how sales were picking up as well as items on display.

Among the 10 exhibitors present as at the time of visit at the weekend, none had made any significant sales but some expressed hope that as many people return home for the festive season, they would pass through to make some sales.

In an interview Mr Kwame Boateng, the Chief Executive Officer of the ‘Thick Tall Man’ hats (makers of local unisex hats) said sales had not been good for the past few days but as this year had been declared as the year of return, they were hopeful that many people would return and patronise their products.

He said: “This year as the Year of Return, I am hoping to meet people from all walks of and the Diaspora to buy,” urging them to be assured that Ghana product were of good quality.

Ms Faustina Adzofia, the Assisting Market Manager at the AACD-African Market said the Market opens a fair every year to create a common market for exhibitors to introduce their products to the world as many foreigners and Ghanaians return home.

She said last year, there were 25 exhibitors in the Market and that many more were expected to participate in the ninth edition of the fair to make known to the world, the rich Ghanaian and African culture towards its preservation.

She said more people from the diaspora were expected to participate in the fair as they do every year because more new products has been added to the range of products to be exhibited.

She said some of the antics, jewelry, clothing, paintings and accessories to be exhibited were coming from Burkina Faso, Mali, Ivory Coast and other African countries in addition to that of Ghana.

Other businesses present at fair were Gawa Fashion Centre, which produces ladies straight dress, top and down, men’s classic shirts and all forms of African print wears; Utama Style Pride, which supplies various forms of locally made slippers, t-shirts, customised purses, sandals, and all forms of bags among others.