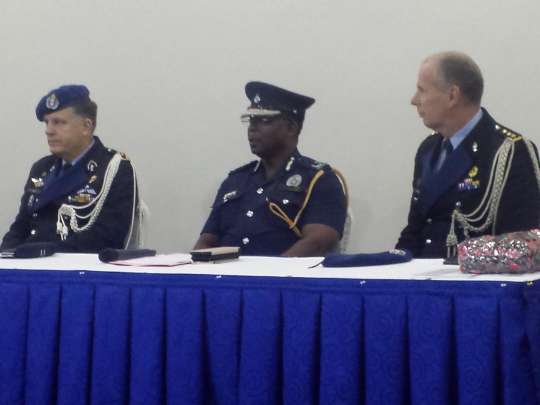 Commissioner of Police (COP) Prosper Kwame Agblor, Director General, Legal and Prosecutions has asked members of the public to expect warmer reception from the police in their bid to promote effective policing.

The public should also expect police personnel to be firm and fair in relating to them as they carried out their mandate as they would use dialogue instead of violent approaches to resolve issues.

It was during the closing session of the training of trainers’ course on Improved Police-Public Relations (IPPR).

Speaking on behalf of the Inspector General of Police, COP Agblor said the Service was seeking new ways to better protect lives, property as well as strengthen communal relations.

He explained that the IPPR programme was intended to remove the human factor elements that widened the gap between the protector and the protected.

“This is why the programme targets firstly frontline officers to enhance approachability.”

He said as Ghana headed to the polls, personnel were being given special skills to be more tolerant, civil and law abiding in every facet of the democratic landscape.

Effective policing and crime prevention, he said thrived on the collaboration between the police and members of the public.

COP Agblor said it was intended to be owned by Regional Police Commanders and train about 8,649 frontline personnel.

He said noted that in the quest to enhance and standardise police training, a Technical Curriculum Review Committee had been set-up to holistically review police training at all levels.

The Director General cited that Community oriented Policing Module cuts across all levels of the newly proposed curricula and training structure to reflect not only modern trends in policing but place it on sustainable axis to communication gaps and address all challenges between police and the public.

He said the unprofessional conduct of some personnel, which had dented the image of the Service would negatively impact on crime prevention strategies, adding that it would make people reluctant in assisting police with information.

He urged personnel to work with members of the communities, win their trust and collectively fight criminal activities.

Assistant Commissioner of Police (ACP) Sani Baba Adamu, Director, International Relations said with the skills acquired, he had no doubt that service to the public would not improve.

He urged participants to put the knowledge gained into good use.

In all, 36 selected personnel from the Public Relations Unit, Inspectors and Chief Inspectors, who were frontline personnel in engaging the public, benefitted from the European Union Police and Civilian Services Training-sponsored programme.

Also among the participants were implementation agents from nine administrative regions.

They were each presented with a certificate of participation.

Minor, another in court over robbery

Mechanic in court over threat of death