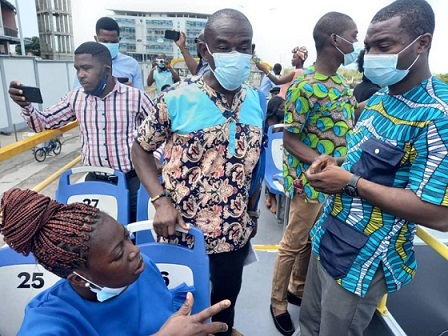 Media practitioners on Tuesday took their turn of the promotional tour of the Greater Accra Region under the “Experience Ghana, Share Ghana” domestic tourism campaign being rolled out by the Ghana Tourism Authority (GTA).

The promotional tour, which started on Wednesday, June 16, 2021, with the staff of the GTA, is aimed at encouraging Ghanaians to take a tour, know their culture and also to create jobs as well as grow the local economy.

A double-decker open-air tour bus, which was conveying the media, took off from the Accra Tourist Information Centre through some principal streets of the capital city.

At Jamestown, the bus stopped briefly, and media practitioners, as well as others on board, were given a brief history of the area and some of its historical sites.

Mr Jones Aruna Nelson, Ag. Corporate Affairs Manager, GTA, said they introduced the city tour bus and the mummy truck (Boneshaker) as one of the ways to encourage Ghanaians to get to know their localities and communities.

He said the city tour was also to help the GTA map out routes for the bus prior to the operation of commercial city tours nationwide.

“So we started with the city tour here in Accra and eventually it is going to be replicated in all the regions, but for now we are just doing Accra.”

Mr Nelson maintained that “So far, touring on the bus has been a good experience and I will encourage all and sundry to patronise this initiative so that we can increase the domestic tourism numbers. We have had a meeting with the tourism trade associations to give discounts to those who want to embark on tours in the city and to all the other regions.”

He noted that the “Experience Ghana, Share Ghana” was the latest initiative by the government to help whip up interest in domestic tourism.

Last week, staff of the Ministry of Tourism Arts and Culture and stakeholders in the sector started the Accra City Tour campaign.