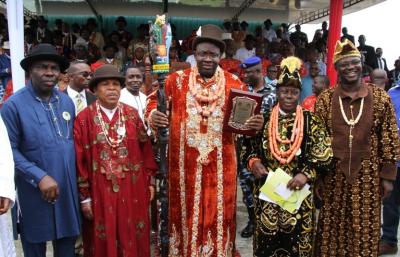 Ijaw leaders at the weekend in Kaiama, headquarters of Kolokuma/Opokuma Local Council Area of Bayelsa State, paid glowing tributes to the only surviving member and Second-in-Command of the foremost Niger Delta Volunteer Force (Capt. Sam Owonaro, as he marked his 70th birthday anniversary.

Capt. Owonaro, alongside Major Isaac Adaka Boro and Nottingham Dick, pioneered the first militant agitation in the Niger Delta during the ?12 Day Revolution? of 1966 when they took arms against the Federal Government before they were rounded up by federal forces, charged and sentenced for treason.

Bayelsa State Governor Seriake Dickson, who portrayed the celebrant as a reminisce of the philosophies of Isaac Boro, Ken Saro Wiwa, among others, that laid down their lives for the emancipation of the Niger Delta Delta people, described him as a living legend, a source of inspiration and a shining light to the Ijaw race who they brought from obscurity to limelight.

Dickson, who was represented by his principal secretary, Mr. Douye Diri, said: ?At this point in our history, what we (Ijaws) should be talking about and demanding is reparations from the Nigerian state for the age-long rape on our resources, environmental pollution, injustice and neglect?.

First civilian Governor of Bayelsa State, Chief Diepreye Solomon Alamieyeseigha, said the foremost revolutionaries were motivated to carry arms against the Federal Government because of the level of under-development and the cries of Ijaw people in the face of oppression.

He described them as ?extraordinary persons and angels who were sent in human form to liberate and open the eyes of Ijaws?, noting that Chief Owonaro is alive today to tell the story.

Alamieyseigha, who chaired the occasion, said: ?Isaac Boro and Owonaro have begotten many others. We are not there yet because we are still talking about resource control and self-determination. Nobody gives you power freely, you have to seize it and we must rally round our leader to give him moral courage?.

In his tribute, Acting President of the Ijaw National Congress (INC), Charles Ambaowei, urged Ijaw leaders to emulate the selfless services of Owonaro and his compatriots who rose above selfish interest to lay down their lives for the Ijaw nation.

He further regretted that the Nigerian nation was still not being fair and equitable to the Ijaw as evident in the retention of the obnoxious Land Use Act and proposed 18 per cent derivation by the National Conference.

Capt. Owonaro described the few political and economic changes in Ijawland as an eloquent testimony of how little the people have progressed since they began the agitation but regretted that the Ijaws still have a long way to realise the dreams of Isaac Boro.

?We need a new strategy. The happenings in the confab give us great concern. Democracy as is being practised is a system whereby the majority oppress the minority and this is morally unacceptable?, he said.