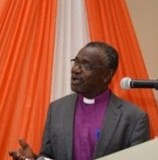 Right Reverend Dr Brew Riverson, former Bishop of the Kumasi Diocese of the Methodist Church, said extreme partisan politics is attributable to the current state of apathy and lack of consensus building on important national issues.

In a statement issued in Kumasi on his views about the state of affairs in the country, the 90-year-old Reverend Minister said partisan politics was tearing the nation apart.

“It seems partisan politics is the poison that has been killing the nationalism and unity in our nation Ghana,” he said.

Rev. Riverson, describing himself as an advocate for leadership, service, peace, and unity in Ghana and Africa, said most of the contributions made on the airwaves failed to build the nation.

He said it was sad that people blamed only presidents for failures and successes of the nation, forgetting about their individual contributions to nation building.

“We behave as if it is only the presidents who have the responsibility for the failures and successes of the nation. We forget it is the total population that decides what we, as a people, must do to push this nation forward”.

As a developing nation, he said, it was only the hard work and honest practices of the people such as prompt payment of taxes and avoiding corrupt practices and smuggling that could increase productivity and gross domestic product.

“We should all seek the progress of the nation and work as one people who love our nation”.

He stressed the need for the people to support their leaders and harness the best in everyone for national development.