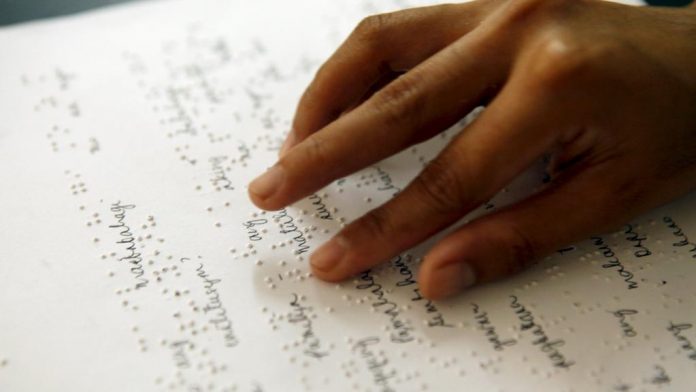 While many Chinese are going to movies during the week-long Spring Festival holiday for fun, in a cinema in northern China’s Tianjin Municipality, Zheng Wei explained the film “The Spring Festival” for a group of blind audience.

“Fireworks light up the dark on New Year’s Eve. Children are playing in an open place covered with white snow,” Zheng described the visual elements of the movie, holding a microphone and a script.

As the founder of a “cinema for the blind” in Tianjin, Zheng, 55, has insisted on brightening the dark world of the visually impaired people in his own way for 11 years.

Shao Yuxiang and her husband, a blind couple, are regular visitors to the cinema. She wears an elegant yellow sweater to attend the significant “movie day” for them.

Since October 2007, the free audio-described movie starts at 9:30 a.m. on the third Saturday of each month. There have been over 150 movies screened to more than 20,000 blind visitors so far.

“The theater is equipped with lights, a sound system, projector and big screen to give the blind a complete and equal movie experience to others,” Zheng said.

In 2007, having learned that a “cinema for the blind” established by Wang Weili had benefited many blinds in Beijing, Zheng immediately rushed to Wang’s establishment for advice.

Under Wang’s guidance, Zheng built a new cinema in Tianjin and screened “The Dream Factory” by famous Chinese director Feng Xiaogang, which attracted over 50 blinds from different districts and even suburban areas in Tianjin.

Special movies for certain Chinese Festivals is also one of Zheng’s selecting principals. “For example, ‘The Founding of a Republic’ is specialized for the National Day. Now films for Spring Festival are on my agenda,” Zheng said.

To ensure the quality of the blind movie-goers’ experience, Zheng has to prepare and practice in advance. Zheng would draw “role relationship maps” to fully understand the film. Then, he may edit the movie and recombine some plots.

“Some movie’s plots have many twists and turns, which are presented through pictures, but blind people would have no clue what is going on,” Zheng explained. Adding the scenes, costumes, actions or even emotions on the actors’ faces into the audio description will help the blind understand the story.

Zheng uses the natural pauses in dialogue or between critical sound elements to insert narrative that translates the visual image. “The longest script I wrote was around 8,000 words,” Zheng said.

Live streaming the Beijing Olympic Games opening ceremony on Aug. 8, 2008 for the blind was one of the most impressive moments for Zheng.

Zhang made and painted Olympic rings made from foam boards to let his blind audience have a close “touch” with the Olympics.

Appreciating the 18 replicas of the Louvre in Beijing, touching the parts of Shenzhou spacecraft mold in the Chinese Aviation Museum and experiencing the architectures and history at the Five Avenues in Tianjin, blinds in the city have “seen” colorful worlds through various tours organized by Zheng Wei.

Every December witnesses a New Year’s party held by Zheng. At the first party, a volunteer felt a little bit confused: “Shall we wear formal costumes?”

“We have to do so. Blinds see from the heart rather than the eyes. Dressing properly can show our respect,” Zheng said.

Zhang Haoyun, 22, a volunteer with Tianjin Medical University, said Zheng helped him promote the “cinema for the blind” to more places in the country including northwest China’s Shaanxi Province and northern China’s Hebei Province.

“From a small screen to a large theater, Zheng’s enthusiasm for helping the blind has never faded,” Zhang said.

“I will retire one day, but the cinema for the blind will never retire.”

Zheng hopes to continue this work until he is 80 and looks forward to seeing more and more young people join him to light up the dark world of the blind. Enditem