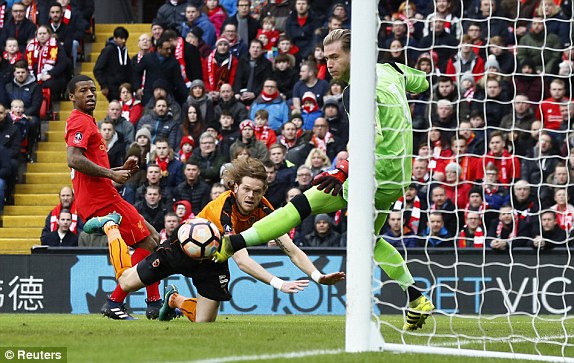 Liverpool’s woeful week continued as they crashed out of the FA Cup with a 2-1 defeat at home to Wolverhampton Wanderers.

Jurgen Klopp’s side were shocked at Anfield seven days ago when they were beaten in the Premier League by strugglers Swansea City. Days later they were beaten 2-0 on aggregate by Southampton and now they are out of the FA Cup at the fourth round stage after defeat to Championship opposition. The Reds were stunned inside a minute when Paul Lambert’s Wolves took the lead after a set piece, which resulted in Richard Stearman heading past Loris Karius. Jurgen Klopp threw on Philippe Coutinho and Daniel Sturridge in the second half and Divock Origi pulled one back late on, but it was too little, too late as Wolves deservedly held on. In the space of four weeks Liverpool have gone from title contenders and being in two cup competitions, one of which they were 180 minutes from Wembley, to being left to fight for Champions League qualification with a slender two-point cushion over fifth-placed Manchester City. Whatever Klopp’s complaints, however, the manager must shoulder some of the responsibility for the defeat against a team 18th in the division below after making nine changes from midweek with only Karius and forward Roberto Firmino surviving.

Klopp will point to the hectic schedule his team have faced – Tuesday’s visit of Premier League leaders Chelsea will be their 10th match in 32 days – and yet more officiating decisions going against them but there can be no excuses for the way his team have fallen away so badly.

In the first minute Wolves won a free-kick wide on the right. Helder Costa managed to steal 10 yards to make a more acute angle so when he swung in his cross Karius was caught in two minds whether to come for it or not.

The German opted for the latter and Stearman, who started in an offside position, took advantage to head home his first goal in English football since April 21, 2014. Firmino gave away possession on the edge of Wolves’ area three minutes before half-time the ball was quickly switched to Costa wide right who, after Alberto Moreno completely missed his tackle, threaded through a pass for Weimann to score just a matter of seconds later.

Georginio Wijnaldum had a justifiable penalty shout turned down after a challenge from Weimann but Liverpool ended the half with 79 per cent possession and not a shot on target to show for it.

The introduction of Daniel Sturridge and Emre Can made little difference, although Liverpool did get one back late on when Origi volleyed home from close range.

Wolves would have scored a third through substitute Jon Dadi Bodvarsson had it not been for Karius’ point-blank save and they held on for a shock win after Burgoyne denied Origi on the line.

Our local rice production will suffer if benchmark is not reversed

Shock at suicide attempt of political prisoner in Belarus courtroom