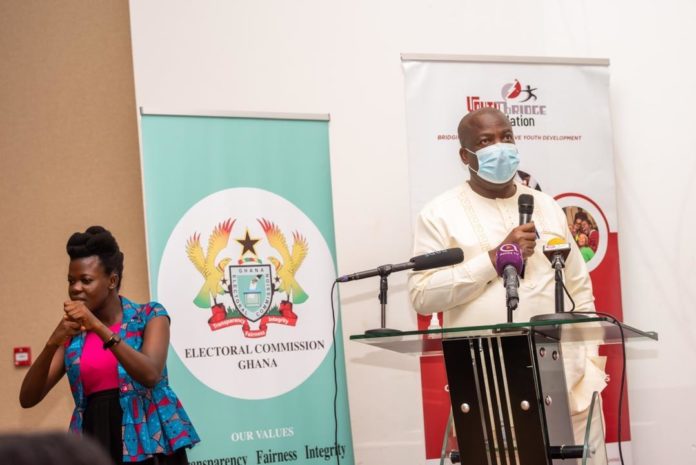 Dr Serebour Quaicoe, Director of Electoral Services at the Electoral Commission (EC) on Tuesday said the spread of fake news especially about elections was his worse fear in the 2020 Presidential and Parliamentary Elections.

He explained that the broadcast of fake news had the tendency to create tension and advised the youth not to be conveyers of such news.

Dr Quaicoe, who was speaking at a day’s youth dialogue in Accra, said the youth were often the target of spreading false news because they were technology savvy.

The forum jointly organized by the EC and the Youth Bridge Foundation was on the theme: “The Electoral Offences: The Unspoken Threat to Peaceful Election.”

He said, “Videos, audios, and photos could be distorted to mislead you to act violently.”

Dr Quaicoe said in the era of new and social media where citizens have become their journalists, tweeting and posting their news, the effects of fake news and misinformation could be damning.

He stated that several factors accounted for the spread of fake news, including the urgent quest for information by news consumers in critical times, and the modern-day individual’s over-dependence on digital media.

Dr Quaicoe noted that in an election period, fake news could even change the political direction of any country and cautioned the youth not to indulge in such activities because the source and the broadcaster could be jailed.

He noted that many had attributed the generally peaceful nature of elections in Ghana to the efficiency of the EC, which had the core mandate to conduct and supervise elections.

“It is however important to emphasize that the EC can only achieve this mandate through effective collaboration with its stakeholders, such as the electorates, including the youth,” he said.

Dr Quaicoe said the youth constitute a significant percentage of the voter population in the country.

Madam Abigail Nutakor, EC Head of Gender, Youth and Disability Unite said the youth were the future and must not be used as pawns by politicians and other people to incite violence during the upcoming elections.

“Let your words and actions build and unite, not destroy and divide. Do not be lured to engage in electoral offenses such as snatching ballot boxes and double voting defacing of posters,” she said.

Mr Seth Oteng, Executive Director, Youth Bridge Foundation, said Ghana had earned a good reputation in holding peaceful elections over the years and the youth had a role to play in sustaining the democratic credentials.

He advised the youth especially first-time voters to protect their future by shunning electoral violence.

“Avoid anything that will disturb the peace of this country since peace is a major factor that determines a country’s economic growth,” he said