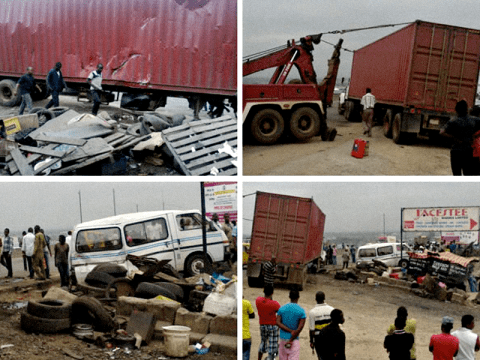 At the turn of this century when the death toll on the world?s roads hit 3400 per day and nearly 1.3 million with up to 50 million injured every year, the United Nations General Assembly on May 10, 2010 proclaimed the period 2011-2020 as the Decade of Action for Road Safetywith a goal to stabilise and reduce the forecast level of road traffic fatalities around the world by increasing activities conducted at the national, regional and global levels. Four years later, On April 10, 2014 the UN General Assembly again adopted a resolution on ?Improving global road safety?. Among key decisions, the resolution emphasises a continuous monitoring of the progress in the Decade of Action. On June 25, the Africa 2014 Summit for Vehicle Inspection and Road Safety Officers will kick off in Calabar. For the past three months, since the rains became intense in Lagos, motorists and pedestrians alike have witnessed an unprecedented rise in the number of freight containers and container-laden trucks that fall on a daily basis on our highways, especially the Apapa-Oshodi Expressway.The Federal Road Safety Corps, FRSC and other road traffic management agencies have continued to blame road mishaps on bad roads and human error. But a situation where a freight container slips off the flatbed of a freight truck possibly on a bad spot on the highway, and as usual, crushes commuters to death is an eye-opener to the fact that the factors extend to something much more sinister. It puts the roadworthiness of the trucks to question.

Besides the delays, the Federal Government is doing good work in on-going road rehabilitation projects in the state and nationwide through the Federal Road Maintenance Agency, FERMA. And the FRSC is doggedly pursuing its target to reduce road crash deaths by 50% by the year 2020. But the Federal Government must do better through the Vehicle Inspection Office, VIO. The chronic underperformance of VIO?s Inspection and Maintenance Unit and the resulting high casualty rate due to falling freight containers on our highways is worrisome. It is inconceivable the number of human lives, vehicles and man-hours that have been lost to fallen containers and the avoidable traffic jams that follow each incident. Incidentally, nobody seems to count the economic cost of a fallen freight container.

The Nigerian Shippers Council, NSC had in May complained to truck owners under the aegis of Association of Maritime Truck Owners, AMARTO about the rickety condition of trucks plying the ports, which according to the Council has caused delays in cargo delivery. Considering cases of containers not properly latched to the trucks and which fall off the trucks and crush people on the roads, NSC laments on the huge economic loss accruing from these unprofessional practices. No doubt, the issues raised by the Council are a pointer to a grim trucking future if proactive measures which include re-fleeting the truckers are not taken.

When so many container-laden trucks are involved in road mishaps on a daily basis, it is fair to ask whether the fault lies with the trucks. Is it time to privatise the responsibility of routine inspection of Nigeria?sentire trucking fleet?The idea has circulated in various forms, though it runs into legal and practical problems. But if the NSC has confirmed that many of the trucks plying our roads are not roadworthy, then it?s an indirect indictment on the competence of the VIO in the area of vehicle inspection and certification.

The establishment of VIO was in response to the recommendation of the 1980 International Treaty on the Harmonisation of Highways Legislations in the Economic Community Of West African States, ECOWAS Sub-region as approved by the Authority of Heads of State and Government. Like in other ECOWAS member states, the VIO machinery was established in the Federal States of the country and the Federal Capital Territory, FCT to be responsible among other functions for organising technical inspection of road transport vehicles. Among these road transport vehicles are the freight trucks which haul 20 and 40 feet freight containers to and from the seaports across the country. By design, the flatbed trailer of the truck and the intermodal container are an integrated transport system that employs a combination of twist locks and corner castings to effectively secure the container to the truck.

According to an online publication; Handbook on Cargo Securement for Intermodal Containers, it is required that each intermodal container be secured to the vehicle chassis with securement or integral locking devices that cannot accidentally become unfastened. Securing devices must restrain the container from moving more than 1.27 cm forward, 1.27 cm rearward, 1.27 cm to the right, 1.27 cm to the left and 2.54 cm vertically. The book goes further to say ?if necessary, use secondary attachment to ensure that latches remain fastened in transit and if a latch is missing or broken, secure the corner by an alternative means such as chain or wire rope?. This description contrasts sharply with what is obtainable on many freight trucks at Tin-Can Island and Apapa. While the Corner Casting, which is called the female part of the connection fitted in the container with an oval hole and without any moving portion remains solid and intact at the eight corners of the container, the Twist Lock called the male part, which is a systematised rotating connector fitted to the transport bases and cranes appears missing in many cases.

For some trucks, there are clear evidences that the twist locks, which by standard are 104.1 mm long, 55.9 mm wide with a pointed top and rotated 90 degrees so that it cannot be detached, are not originally part of the chassis of the flatbed. They are unprofessionally welded onto the flatbed and are as such improvised and substandard. It is trucks under this condition that present the biggest challenge to road safety as far as container haulage is concerned. Unfortunately, VIO?s Inspection Unit has continued to ignore these abnormalities and their risk factors which have continued to deepen the crisis in motor vehicle administration and traffic management in Nigeria.

Coconut Bus Stop at the foot of Coconut Bridge is the busiest Bus Stop on the Apapa end of the Apapa-Oshodi expressway. Passengers from downtown OlodiApapa converge there every hour of the day to join buses to their various destinations. Unquestionably, the road at that spot is bad and for that reason, containers slip off the trucks and fall every day at that busy Bus Stop. Besides the avoidable human carnage resulting from the carelessness of the truckers and the negligence of the VIO, fallen containers constitute heavy traffic gridlocks along the stretch of that expressway leading to delays in cargo delivery and consequent loss of man-hours.

To suggest the idea of privatisation of vehicle inspection as a panacea for standardisation and quality assurance of road haulage units highlights the level of public mistrust arising from the failings of the VIO. The VIO is not lacking in human capacity nor does it lack reform ideas as the novelty of the electronic encoding system which its Abuja office introduced in July 2010 for motorists in Abuja shows. Overall, its underperformance is not more significant than that of any other law enforcement agency in Nigeria. The VIO?s biggest problems are all internal and operational. It lacks the strength of character to stand out and disconnect itself from every appearance of corruption and laissez faire that has reduced the police to a mere scarecrow on our highways. Otherwise what would embolden a trucker to put on the road trucks whose roadworthiness is in doubt? What would make the VIO to blame every truck mishap on bad roads when it is obvious that many of the trucks plying the roads are in bad shape structurally and otherwise?

Yet the issue of who inspects the trucks in place of VIO is hard for commuters and the general public to address: they can only advice, not dictate. Lagos residents are suffering most from the recklessness of these truckers alongside all manner of ugliness associated with urban transportation. But,in this regard, the state government seems to be more interested in taxing and fining motorists legally and illegally through the Lagos State Traffic Management Agency, LASTMA , Transport Unions, and hordes of touts known as Area Boys. At Tin-Can Island First Gate, the Nigerian Navy, Nigeria Police, Nigerian Ports Authority Security, and the Maritime Workers Union of Nigeria concentrate on bribes which they demand with impunity from every truck that enters the ports and end up creating illegal queues that make the road impassable on a daily basis. No one bothers about the roadworthiness of the trucks though the Lagos State VIO lays claim to routine checks and instant arrest of offenders on the issue of unlatched containers.

The question is what it would demand of the Federal Government to add fresh impetus to vehicle inspection especially for freight trucks in Nigeria.An effective periodic vehicle inspection program commences with an effective government mandate that provides insight concerning who will administer the programme and what administrative resources are necessary to perform all of the programme functions. The programme functions may include management of service providers, media communication, corporate and social responsibility and quality assurance. Essentially, the government must review the operational model for effectivecountrywide vehicle inspection program. In most cases, there are three types of operational models; centralised, decentralised, and hybrid models.

The hybrid model would be best for Nigeria because it involves the government authorising more than one operator to run a controlled vehicle-testing network within a specific state. So rather than VIO alone handling drivers testing and training, motor registry, motor licencing alongside vehicle inspection, the government could grant franchise to private operators with relevant international experience to operate a vehicle-testing network within a defined territory. The VIO would be responsible for maintaining standards within each network.

The menace of falling freight containers should be given urgent attention. The rains are here, the potholes are getting deeper, road rehabilitation work at Apapa-Oshodi Expressway is getting slower and the VIO is having more excuses for its inefficiency. Now the immediate fear of who the containers would crush next has, as usual, gripped Lagosians.