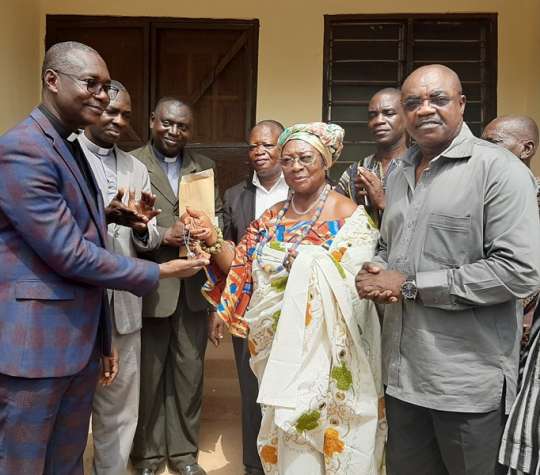 The Family of the late Madam Selina Oppong Asare, a staunch Presbyterian, has donated a six bedroom semi-detached house at Asikam near Kyebi to the Akyem Abuakwa Presbytery of the Presbyterian Church of Ghana (PCG).

The late Madam Oppong Asare believed in promoting the works of the PCG as well as empowering women in the Akyem Abuakwa communities.

The six bedroom house has two separate apartments with three bedrooms each, well-furnished with a vast area of land attached.

It is to be used as a hostel facility to support education in the area.

At a short and solemn ceremony to hand over the property to the PCG, Nana Adwoa Esaa Bene Beyeeman I, Gywantoahemaa of the Akyem Abuakwa Traditional Area, and elder sister of the deceased, said her late sister had the development of the Church at heart and wanted to see its youth and women empowered.

She said her sister’s children and siblings decided to hand the building to the Akyem Abuakwa Presbytery to honour her memory and epitomise her love and commitment towards the growth of the Church.

Nana Beyeeman said Madam Oppong Asare, who died eight years ago at age 63, established the Calvary and Trinity congregations of the PCG in the United Kingdom (UK) where she lived and worked until her demise.

She said her sister believed in women’s empowerment and so set up a revolving fund to give soft loans to women in the informal sector as well as purchased choir robes and musical instruments for the Asikam Presbyterian Congregation.

Nana Beyeeman said the family was aware of the challenges the Presbytery faced with accommodation, hence the decision to hand over the house to it to enhance the work of God.

“My siblings and our late sister’s children believe that the house has been given out for a good cause and our sister would be happy where ever she is”.

Professor Kwasi Koranteng, an official of the Commonwealth Secretariat, London, and a junior brother to the deceased, said Madam Oppong Asare lived all her life in the service of the Presbyterian Church and, therefore, the donation of her property to be used for Gods work was the right decision.

He, however, appealed to the Church to inscribe his sister’s name boldly on the building in her memory to serve as encouragement to others to “labour in the vineyard of God.”

Rev. Dr. Seth Kissi, the Akyem Abuakwa Presbytery Chairman, who received the keys to the house, expressed gratitude to the family for the gesture.

“In our part of the world it’s unusual to see such gestures where property were donated to the work of God,” he said, adding that wherever the story of the Church would be told that of Madam Oppong Asare and the entire family would not be lost.

He said the building was a huge relief to the Church and that it would support families in the Presbytery when the need arose.

He pledged to maintain it well to justify the goodness for its donation.