There seems to be a never ending multiplicity of illegality at the Ghana Commercial Bank (GCB) under the full watch of the controversial Managing Director, Ernest Mawuli Agbesi, who has two more years contract with the Bank.

With time running out on him, the MD has employed tactics to put his favourites in vital positions to enable him carry on with his manipulations within the bank.

Reliable facts available point to a situation akin to ‘festival of family’ and friends where top brass of the Board of Directors led by the MD Mawuli Agbesi, have fixed their daughters, uncles, nephews, nieces, cousins, friends among others, mostly new comers with permanent contracts. 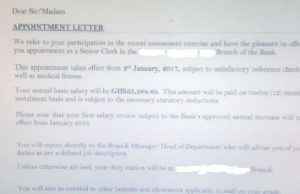 One of the appointment letters addressed to some of the new staff indicating an annual salary of over GHC30,000. For the protection of sources, we decided to take off the branch names they have been posted to work.

From all indications, it appears the GCB MD is running the state-owned Bank as his personal property coupled with his bulldozing machinations.

The worst of it all is the top hierachy of the GCB Workers Union, who have been gagged with juicy promotions and salaries and as a result have become disinterested in the welfare of their own colleague staff.

Some of these beneficiaries, who investigations have reavealed, are closely tied to the ‘GCB Big Men’ have crossed carpets from other banks to GCB in search of gold at GCB.

Further probing into matters revealed that a recent national assessment examination organised by GCB saw a lot of old staff passing the exams but for strange reasons, completely new set of people have been brought on.

The most annoying aspect of it is that these freshers have been engaged permanently with huge salaries while old contract staff have been ignored without any new incentives.

This situation, ModernGhana learned is creating disaffection among the old staff since most of them had been working on renewable six month contracts for over 25-years, 20-years, others 15-years, 10-years and so on.

Insiders at GCB claim “If you don’t have a Godfather at the top, forget about promotions and salary incentives.”

Read: Full list of Sir John’s properties he willed to his family

Rainwater swamped roomS, soaked clothes and other items in Accra