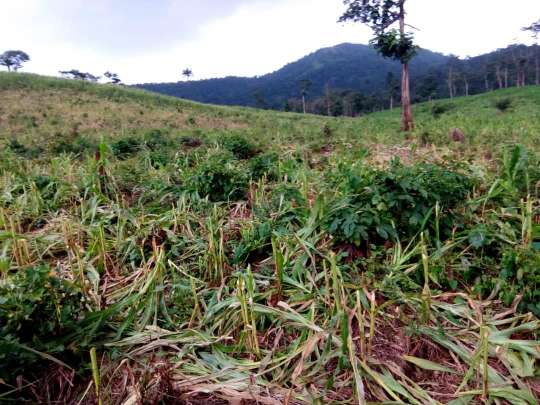 About 77.5 acres of maize farm has been destroyed in the Chai and Asukawkwa forest reserves by guards and the Rapid Response Unit of the Forestry Commission.

The farms were destroyed because the farmer entered the Forest Reserve without permission and cultivated without authorisation.

Mr Akwasi Adjei Adomako, the Krachi East Municipal Forestry Commander, who disclosed this to the Ghana News Agency in Dambai, in the Oti Region, said intelligence led to the arrest of the culprit, one Lumba Akatsi, who illegally entered into the restricted area and cultivated the produce without permission, hence the destruction.

Mr Adomako said upon assumption of duty in the Karachi East District, he discovered that some members of the public have entered into the reserve for their self-serving agenda of either felling timber or destroyed some segments of the resource for farming activities, which was in breach of the laws.

He said the reserves have thus witnessed declining tree and vegetative cover, resulting from illegal activities, which needed to be halted.

He said that the farmer in question has been arrested and was currently on police enquiry bail to assist in investigation.

He expressed the belief that the arrest and prosecution of Lumbar would serve as deterrent to those in the habit of destroying national resources for parochial means.

Mr Adomako said the Commission had stepped up afforestation exercise and had planted about 31,000 trees both on and off reserve, while about 44,000 teak, Mahogany and Odum trees have also been planted to restore the reserve