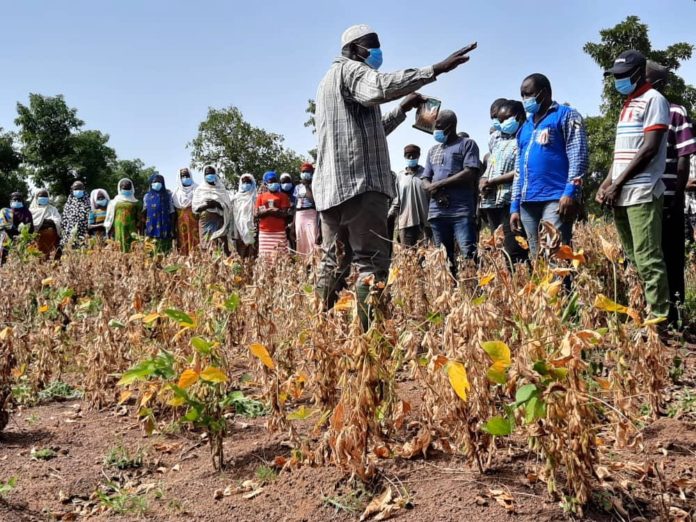 Some farmers in the Karaga District of the Northern Region have expressed interest in the cultivation of Favour, a new soybean variety, to enable them to enhance productivity.

The farmers expressed the interest after a tour of an 80-acre soybean seed farm at Yemo-Karaga in the Karaga District to learn about the Favour soybean variety.

The field was cultivated by Tiyuntaba Farms, a seed production company, as part of efforts to connect seed producers and farmers to speed up the awareness and the adoption process of the Favour soybean variety.

The Favour soybean variety was released last year by the Council for Scientific and Industrial Research–Savanna Agricultural Research Institute (CSIR-SARI), based at Nyankpala in the Northern Region, under a soybean project sponsored by BHEARD to amongst others improve the seed system in the country.

The Favour soybean variety is a high-yielding variety, up to 20 per cent more yields compared to others, produces many leaves, which can kill weeds under crops, increases nitrogen in the soil and has good milk content.

Madam Rahinatu Abukari, a soybean farmer from Zinindo in the district, said the 80-acre soybean seed farm was clean of weeds, and the yield was high compared to the variety she planted.

“In the next season, I will plant the Favour variety on my two-acre field to harvest more.”

Madam Salamatu Iddrisu, a soybean farmer from Yemo-Karaga, said: “The new soybean variety offers high prospects for farmers in terms of yields. This is good for us and I want to cultivate the same variety on my two-acre field to harvest more. This is good for our income to continue to take good care of our families.”

Mr Yakubu Hussein, a farmer from Zinindo, who cultivated 20 acres of soybean in the previous farming season, said the Favour variety was good and had made the field clean.

Mr Hussein said he would recommend the new variety to farmers, and said it had the potential to transform their lives.

Alhaji Issahaku Mahama, the Managing Director of Tiyuntaba Farms, assured the farmers that the company was ready to supply the Favour soybean variety to individuals, groups and companies to help improve their productivity and incomes.

Dr Doris Kanvenaa Puozaa, the Leader of the BHEARD Soybean Project at CSIR-SARI, said the project in partnership with seed producers and non-governmental organisations established 14 seed farms of Favour soybean variety to help ensure the availability of the seeds to farmers for cultivation to ensure food security.